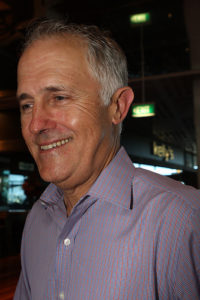 From the Sydney Morning Herald, September 14, 2015, quoting Malcolm Turnbull, upon his replacement of Tony Abbott as Prime Minister:

“Now if we continue with Mr Abbott as Prime Minister, it is clear enough what will happen. He will cease to be Prime Minister and he’ll be succeeded by Mr Shorten. You only have to see the catastrophically reckless approach of Mr Shorten to the China-Australia free trade agreement.

“Surely one of the most important foundations of our prosperity, to know that he is utterly unfit to be Prime Minister of this country and yet so he will be if we do not make a change.

“The one thing that is clear about our current situation is the trajectory. We have lost 30 Newspolls in a row. It is clear that the people have made up their mind about Mr Abbott’s leadership.”

“I do have a bit of advice for the No campaign, this strategy of putting up Tony Abbott and following his lead is a losing strategy for them.. we’ve seen what happened to Tony Abbott, when the original “Dr. No” was out there, incredibly unpopular, he was even abandoned by his own party, he lost 30 Newspolls in a row, so if they’re going to hook their wagon to Tony Abbott, the no campaign, well, it’s a sure bet they’ll lose.”

“It has now become normal to wake up every second Monday and see the latest Newspoll in this newspaper. It is now normal to expect a shocking result for Malcolm Turnbull and the Coalition.

“This Monday was no exception as the losing run for the Prime Minister and his team continues unabated. As we now see the sequence of bad Newspolls reaching the twenties, it must be dawning on the Liberal party room that the magic number 30 is fast approaching.”