A sprawling engorged government that was unelected by the overwhelming majority of of those that it presides over. A system that micro-manages day to day life in a group of formerly sovereign nations. A system that redistributes wealth from prosperous nations to member states that are less prosperous. A system in which dissenters are ostracised by friends and family and labeled as thought criminals, and any alternative to said system is regarded as suicidal and apocalyptic. As The Smiths famously sang, stop me if you think you’ve heard this one before.

This could easily be a description of Eastern Europe behind the Iron Curtain. The Soviet Bloc. But what we’re actually seeing is Soviet Bloc 2.0. And even the Soviets realised that presiding over a bunch of European nations in a state of economic misery and cultural homogeny is a failed business model. The Russians get it. Why don’t we? 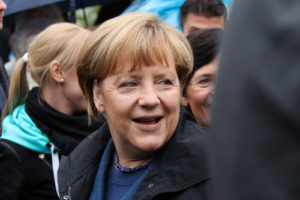 It’s difficult for some people to see. The likes of Angela Merkel, Mark Rutte, and Emmanuel Macron may not look like your garden variety communists. These people are bankers, they dress sharply, they like nice things. The image of the people’s leader standing in the breadlines is a fallacy. People think of communists, and they think of a leader in khaki, someone of the people.

This view is quickly dispelled by looking at a photograph of how Stalin dressed as opposed to a photograph of how a peasant, and even a comparitively better off Kulak (better off till Stalin had his way) dressed. It isn’t even a contest. Just because these people are in finance, are personally wealthy, and share many of the aesthetic tropes of capitalists, don’t discount the fact that they believe that brutal austerity and breadlines are the ideal outcome for everybody else.

China loves all of the spoils of the West. They love Tourism, nice cars, nice clothes, and of course Aussie Grange. Here are some other things they love. Totalitarianism, religious persecution, intimidation of the populace, Internet censorship, imprisoning activists, organ harvesting, I could go on… the logic that ‘Macron is a banker, so how can he be a communist?’ makes absolutely no sense in any context. At best he is complicit in a betrayal of genuine democracy, at worst he is a proponent of the little red book and an all-in acolyte of the E.U’s only marginally friendlier brand of Marxism.

As the E.U continues to tell Brexiters who are onto their business model that they’re being ‘paranoid’ and ‘xenophobic’, we have a smoking gun courtesy of the Daily Mail. Many realise that the German chancellor is an agent of chaos leading Germany down the road to cultural suicide, but most assume that this is due to incompetence or progressive naivity.

I suspect it’s something more complex than that. It’s a little known fact that Angela Merkel’s parents moved from West Germany to East Germany by choice when the Berlin Wall was still standing strong. Let that sink in for a moment. These people were so socialist by nature that they willingly gave up the freedom for the kind of oppression that so many tried to escape from in the opposite direction. It isn’t difficult to speculate about their ideological leanings, or the politics that they instilled in their daughter.

Although it hasn’t amassed the body count of the prototypes that inspired it, the E.U. is arguably more insidious than traditional Marxism in other ways. It is an ideology that masquerades as an apolitical system of administration with no dog whatsoever in the fight, and that’s potentially even more dangerous than a rogue communist state with a silly dictator in plain sight. The people of Europe are far more malleable and suggestible if they fear they may be on the wrong side of history or economically unwise than they would be under the influence of a more obvious jackbooted Marxist regime imposing its will by force. The old saying rings true, you catch more flies with honey than vinegar.

Perhaps the most intriguing aspect of the E.U. in regard to Marxist/Communist influence is the heady embrace of one of its most outdated tropes. That is attracting more marginalised masses to the fold in the hope of tearing down the old system, and strengthening the new idealised system as a whole by way of solidarity.

This worked very effectively in the past where other cultures were downtrodden, yet not particularly aligned ideologically, or at least not to such an extent that they couldn’t be swayed by a marginally less miserable level of poverty under communism. The strategy has been rinsed and repeated by the E.U with the Syrian crisis, but will not produce the desired results.

The millions of new arrivals will gladly capitulate with the tearing down of the last vestiges of what Europe once was, and will impress the European Union with their zealoutry and efficiency. The problem for the E.U. lies when the marauders are done with stage one. These are not huddled masses without a strong ideology who will be easily malleable and agreeable to a blind love of state on the promise of welfare.

They will regard a worship of state and a replacement of their prophet with a love of big government as blasphemous. As blasphemous as any Evangelical Christian would. This is the variable that Angela Merkel and other architects of mass migration have failed to take into account. DAAS Kapital or the E.U. Charter may convert those who are invited into the fold free of ideology and lacking in prosperity. But the promise of a modest workers utopia is no substitute for a text that literally promises paradise.

Perhaps the real story in Europe isn’t so much Islam vs. Western civilisation, but the coming clash between Islam and the Neo-Marxist ideology of the EU. It only took a few thousand comrades to set things in motion during the Russian revolution. Over a million refugees arrived in Europe in 2015 alone with no end in sight. I’m sure they can spare enough militants to bring about radical change.

Europeans should naturally be worried, but E.U. officials should be very worried. The likes of Macron and Merkel may well admire people like Che Guevara and Ho Chi Minh, but when the time comes for a consolidation of this new power block, history may remember them as being more like Czar Nicolas and Anastasia.