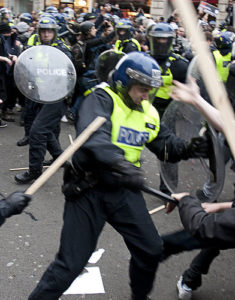 Apparently some sniveling low-life Guardian propagandist got his glasses broken by a Republican candidate over in Montana. The loathsome nerd went on a rampage of crying and wailing and feeling hard done by, while the politician went on to take out the election by a handy margin.

Two years ago this would have played out entirely differently. The shitlibs would have done their same peacock displays of moral outrage and indignation and the conservatives would have duly rolled over and taken it up the proverbial Khyber. Because the one common denominator amongst conservatives for the past 50 years is their refusal to turn up to a fight. The reasoning behind this abject cowardice is that if they did fight back then ‘bad things might happen;’ hell, someone might even get hurt.

We can’t have that. After all, someone has to be the grownup here.

This attitude is seeping into the mainstream. And the shitlibs on the left do not like it one little bit, oh no siree. Because if you haven’t had to fight to get your own way for over 50 years then one thing is certain: you don’t know how to fight.

A shoulder push from a 60 year old politician and a 25 year old shitlib goes down to the floor, breaks his glasses, and then runs around crying to anyone who will listen? Puh-leze.

Some conservatives who are coming around to this same realization aren’t yet fully accepting of the new delicious reality:

“We conservatives have been warning for a long time that liberals are not going to like it when everyone plays by the new rules, and – surprise! – they don’t. But guess what? Most of us don’t like the new rules either. Yet it’s ridiculous to expect human beings to remain in perpetual denial about the situation they face, and to forever live under a double standard that results in their faces getting pressed into the dirt.

“The hypocrisy has become intolerable, and we have stopped tolerating it. This is just the beginning of the reaction, and – make no mistake – this entire situation is a bad thing.”

Au contraire, it is an entirely beautiful thing. This is a joyous time. I wake up every morning and rub myself furiously under the arms with the previous night’s outpouring of shitlib tears.

Bit by bit, more and more conservatives are getting it. 72 year old former tennis champion Margaret Court announced last week that gay marriage conflicted with her Christian beliefs. The entire Australian mainstream media went into total meltdown. Calls were made for her name to be removed from the tennis court named in her honor. And what did she do in response to all of this manufactured vitriol?

She doubled down and told them to take a running jump. How about that? A 72 year old grandmother knows how to do it. Too bad Quadrant’s board members were too busy blinking to show similar qualities of calm steel.

That they are a toothless tiger. That all you need to do is to tell them to take a running jump. And when you do and they revert to form and run around screaming in agony, you can rest assured that it doesn’t work half as well as it used to. The more that people refuse to kowtow then the more that large organisations will find the courage to stand up as well.

Perennial tennis loser Sam Stosur has called for players to boycott all matches on Margaret Court arena at next year’s Australian Open. The following would be the correct response from Tennis Australia once it finds a set of balls:

Tennis Australia concerns itself entirely with the continued success of events such as the Australian Open. Social causes and faux outrages have no place in this context. If Ms Stosur wishes to boycott certain matches then that is her decision. But based on her past performances spectators would most likely only miss her for one round.

Don’t think it can happen? The shoulder charging Montana politician is evidence that it can.

Be afraid, shitlib lefties. There is a lot of furious anger coming your way. I might just invest a few bucks in Specsavers.