Comedy is good, but only if the correct, approved people do it, and if it’s not that funny. We don’t want to go too far, do we. I’m talking the Project, I’m talking Will Anderson, I’m talking Charlie Pickering, I’m talking Our Lady, the Very Blessed St. Kathy Griffin.

So why am I, a bona fide, Left-wing, non-heteronormative, part-aboriginal SJW dhimmi talking about comedy? We usually hate laughter, and rightly so! We prefer to lecture people condescendingly. However, I got thinking about it after the Kathy Griffin controversy, and when a friend of mine from Iran sent me some cartoons soon afterwards. Here’s one: 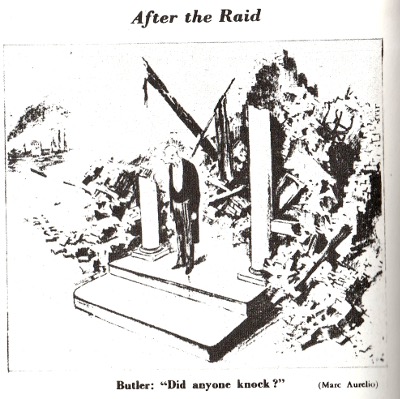 It’s from Der Adler, a magazine published in English by the Luftwaffe during the Nazi era. It’s still funny, because anyone who has a butler is obviously privileged and deserves to die and have their property destroyed by terrorists while their city burns! You’ve got to admit it, this cartoon from Der Adler is as fresh today as the latest Adam Hills tweet! Here’s another one: 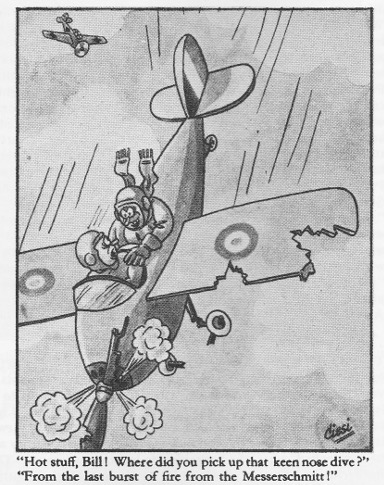 Ha ha! Those dumb Hurricane pilots were shot down defending their homeland from dangerous invaders! They should be at home checking their privilege, not up in the sky trying to shoot down an innocent Messerschmitt pilot just trying to express his freedom of speech!

Anyway, I got thinking that ISIS should really get into this kind of stuff. Kathy Griffin is on the leading edge of this. She is a huge supporter of ISIS. In fact if she were a little younger I’d say she should go to Raqqa and join Caliph al-Baghdadi’s harem, so she can really show her support! (I wouldn’t go at her age now, though. They’d probably ask, “Are you applying to be the palace eunuch?” Because she’s got a pretty flat chest and her voice sounds a bit like a castrated man’s. I’m just saying they might mistake her.)

Kathy Griffin’s cutting-edge comedy is at the vanguard of what we on the Left stand for. That severed Trump head and her serious face — what a great punchline! Such a great masterful build up of comedic tension, just building up, building up, and we’re all wondering, “Where’s this going?” but she just keeps building up, building up… then BAM! That sweet catharsis and laughter. What a pro she is. I had tears coming out of my eyes. Just like Barron Trump!

But we can’t put the whole burden making pro-ISIS jokes on Griffin! Not at all! After all, she was broken by Donald Trump and old white men, so will probably be out of action for a while! Send her your thoughts via Twitter (#hopeforkathy). I’m doing my part. Here’s a good joke I came up with just a second ago: What should they re-name the pub in Borough Market where the knife-wielding jihadi killed seven people? The Allah-Ack Bar! Or how about this one: Keep calm and run, hide, tell!

I asked around here at the Department of Inequality Studies for their contributions. Nope Cowell-Peters applied for a $5000 mini-grant, which was fast-tracked through the usual channels, and then came up with this one:

Oh, this is amazing. The perfect lecture. The perfect way to get awful white people to check their privilege. Al Gore namecheck. Woman in the foreground, man in the background. Reversing gender-stereotyped colours. Overall, a triumph. This ought to be on Talking Pictures. Great job, Nope!

As for the rest of you Lefties, it’s time to step up and see if you can do any better. Help out ISIS and Kathy Griffin today!

Time for other news. It’s a short one this week. Basically, I think I have found a clue as to who made all those bigoted cartoons that were anonymously sent to me. The other day I overheard a tradesman who was here to change the light bulbs, on his phone describing us as the ‘Department of Pussy Studies’. Now, to you and me there is nothing wrong with being a pussy. Got my hand-knitted pink cap with cat ears right here in my office! (I had a girl in Thailand do it for $5. Thanks Fiverr!) But to members of the bigoted, misogynistic, homophobic reactionary Right, like that ‘tradie’, the word ‘pussy’ is a pejorative! Well, I immediately went on Google, which is really good at finding people who think the wrong way. I typed in ‘the racist tradesman who changes the light bulbs at Deakin’. But no leads came up. I figured he probably doesn’t even have a website because he doesn’t even know what the internet is. Tradesmen are just stone age morons, really. Probably thinks his phone is a magic talking box! “Durhh, me hear voice from far away!” Anyway, he’s my number one suspect. I’ve already discussed this with Gillian Triggs over tea and biscuits. (Halal-certified of course). That guy is going down. He won’t be so ‘sparky’ after the HRC gets through with him! By the way, we are accepting applications for new ‘tradies’. Aboriginals and Torres Strait Islanders are encouraged to apply.

No correspondence this week. I have a sniffle. Also I’m a little ‘hoarse’. Seriously though, a horse can serve in the Senate in ancient Rome, but can’t get married in modern Australia. Not even to one of those girls who really love horses. Wow. I know, right? It’s so absurd and unjust that I want to cry. People and equines should be allowed to marry whomever they want and serve in any representative council they want, always! SPQR? More like SPQ-aren’t.