Usually a post on SMH covering needless slaughter in the Middle East would draw hundreds of waspish social justice warriors from gentrified suburbs, and hundreds more heavily conditioned plebs looking to curry favour with those who would never usually speak to them in any real world social interaction, in a mutually masturbatory feeding frenzy of virtue signalling.

Even the act of someone from this part of the world callously ploughing through scores of people (some children) in a lorry would predictably elicit a wave of concern not for the mangled pedestrians, but for the family and friends of the perpetrator should they suffer the indignity of a few questions from the constabulary or a little more scrutiny from the TSA.

But as this post at SMH shows, some Middle Eastern lives apparently matter more than others: 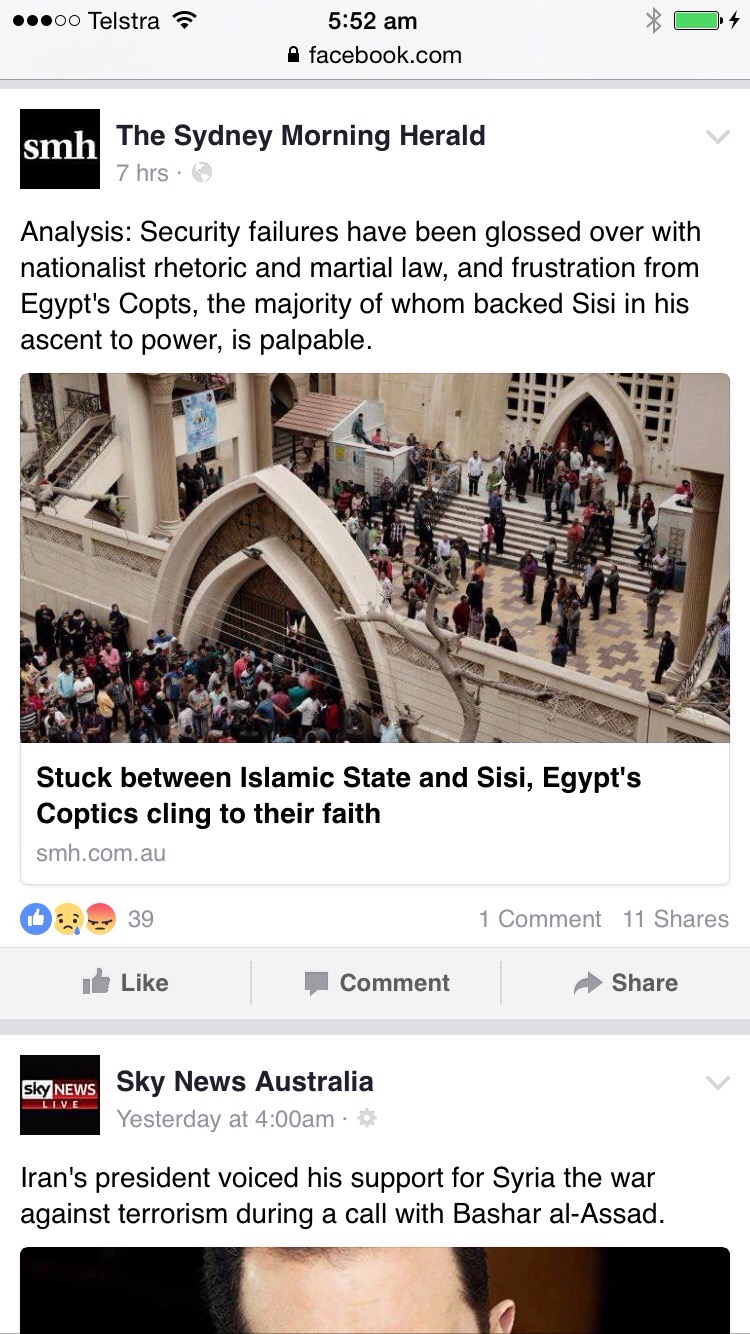 7 hours with few likes, and only one comment. A rather paltry effort for a piece about a minority group being killed because of their religion don’t you think? My aunt got more likes and comments when she posted a photo of her latest crop of tomatoes from the garden. So why did such a big story see such a minuscule response?

People decline to comment on social media news posts for two reasons. Firstly is of course a lack of interest. The second reason is the fear that one’s opinion could be perceived as socially toxic, and with it the fear of ostracism, losing ones job, or being branded a bigot. To suggest that there is no interest in this story or sympathy for the victims is a stretch. And most people, even if it isn’t altruistic, will express sympathy for people who have lost their lives. By all rights there should be scores of comments on a mainstream media post that’s been up for 7 hours.

The really chilling thing is that this leaves us with only the second explanation. Forget the social justice warriors for a moment. This post is still more evidence that the average person now feels that it is socially unacceptable to express sympathy for an innocent Christian who has been murdered if the perpetrator/s happen to be Islamic. To do so now socially falls within the parameters of hate speech. Let that sink in for a moment.

The very people who regard those who are wary of the ramifications of 18C as somehow being paranoid or bigoted are themselves too afraid to express sympathy for children of a minority group blown to pieces, merely due to their religious affiliation. To 18C proponents, causing offence with mere words is a cardinal sin, yet censoring ones own criticism of barbarous extremists is somehow just and above board. Victim blaming at its most primal.

The madness of self-censoring our sympathy for dead children so as not to offend the sensibilities of the Jihadists who murdered them should be self-evident. If you don’t feel safe and comfortable expressing sympathy without fear of reprisal as so many usually vocal commenters clearly do on the subject of Christan persecution in the face of Extremism, that’s all the evidence you’ll ever need as to why 18C and its ramifications for freedom are in need of review.