There is a topic that bounces around the side alleys of the already quirky inter-webs concerning the Berenstain/Berenstein Bears.

These bears were the titular stars of a series of illustrated children’s books, where they lived in a tree house, dispensed moral lessons for their impressionable young readers and, being bears, probably spent a lot of time off screen mauling the odd unwary hiker.

They are also considered to be a teasing hint to the existence of parallel universes.

The argument goes that a significant amount of readers are utterly convinced the books they remember from their childhood were the Berenstein Bears (with an E) and since every single published official book in existence is about the Berenstain (without an E) Bears then clearly something is drastically wrong at a cosmic level. Clearly their memories cannot be that easily confused and the rational explanation is the unwilling leakage from a parallel universe.

Now while regional variations in spelling can be easy to dismiss, we currently have a situation spreading through many parts of the world that is slightly more vexing to explain. Finding a rational explanation for what at first glance appears unexplainable requires a rational mind, and we at XYZ are duty-bound to at least attempt to provide one. For this we must apply the wisdom of William of Ockham and the advice of Sherlock Holmes.

William was the late 13th/early 14th century friar accredited with Occam’s Razor, which is loosely summarised as ‘Keep It Simple, Stupid’, only in Latin. Holmes, by comparison, was the fictional creation of Sir Arthur Ignatius Conan Doyle and is known to have uttered on several occasions variations of the line, ‘when you have eliminated the impossible, whatever remains, however improbable, must be the truth’.

Probably. Your XYZ author confesses to never really getting into Doyle’s crime fiction, much preferring Professor Challenger – who at least got to hang out with dinosaurs – as a favourite Doyle creation and lists non-Holmes ‘The Horror of the Heights’ as Doyle story of choice. This 1913 Strand Magazine short involves giant cloud monsters biting the heads of pioneer aviators somewhere in the skies high over Kent. Awesome stuff. We digress.

To analyse our American social problem, we also need to dip into the works of author Ray Bradbury. Bradbury was an American science fiction author of enormous significance who wrote in the 1950s onward. The importance and admiration of this writer is perhaps best summarised by Rachel Bloom’s 2010 video tribute. It’s on YouTube. It was nominated for a Hugo. It’s not safe for work. 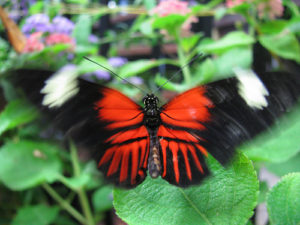 The Bradbury story we are concerned with here is ‘A Sound of Thunder’, first published in 1952 in Collier’s magazine. Set in the future year of 2055, time travel has been perfected to the extent the rich and poorly screened can travel million years into the past in order to blow away a few dinosaurs. One of the hunters loses his nerve, disobeys instructions and accidentally kills a butterfly. On returning to 2055 the travellers discover to their horror that the death of the insect has caused subtle changes to the way English is written and more importantly, the results of the recent elections had been changed to bring in a completely different result and a completely different new president. Hold that thought.

The story has a few minor flaws. 2055 is not going to be an election year in the US without reform, and while most readers will happily accept the invention of time travel, you would be struggling to find anyone who honestly believes changes to the US election system are ever going to happen within a hundred years. Also, to nitpick, butterflies of the type described have not yet been proved to have existed in that historical time period, but basically the story is very well known, considered influential, and better with dinosaurs.

As an aside, the story is not the origin of the term ‘Butterfly Effect’. The words are never used within the story, and that chaos theory-linked phrase is linked to 1960s meteorologist Edward Lorenz. The story is, however, a rather good applied example of the effects of chaos theory, so deep down no one really cares that much.

The bit we all should be caring about is that careless time travel clearly can effect US presidential results. Since November 2016, a minority of increasingly irrational and sometimes violent Americans are openly claiming that Trump is not the president. In their utter confusion they have gone through several stages of denial. First was the claim that the popular vote actually meant something. Then the Russians. Then, in the first stages of the parallel universe theory, the shrill claim of everything being Fake News.

This time travel theory may seem unlikely until one also considers the fact that some of the loudest voices claiming Trump is not president seem to be coming from the Hollywood Elite. Considering that this group is not only rich enough to afford the no doubt insanely expensive time trips, but also vain and stupid enough not to follow basic safety instructions, it does become increasingly obvious that someone in the US has been off in the past killing butterflies.

Improbable? Yes, but remember our advice from Sherlock Homes. The only other, clearly impossible, explanation is that the US Elite, together with their friends within the Mainstream Media, completely ignored the mood of the American public and convinced themselves of the truth of their own closed-environment self-reinforcement, before openly and dismissively insulting anyone who dared disagree with them. This lead to a Silent Majority backlash on polling day by masses of Americans who were sick of condescending Social Justice lecturing, and who wanted not another eight years of ill-defined hope, but for someone to actually start doing something.

Now to the eyes of anyone with the correct college degree this is not only clearly impossible, but is also filling way too many conditions to ever get past Occam’s Razor. It must be rejected, and that only leaves one possible rational solution.

Time travel stole the US election!

There you have it, dear readers: time travel is real, parallel universe theory has been proved, and someone in Hollywood, probably Leonardo DiCaprio, has been in the Paleogene illegally murdering butterflies.

We are, until the next blip in space-time at least, Your XYZ.