Summer Zevros, a woman who accused Donald Trump of sexually assaulting her in October, along with eleven other women, announced yesterday that she was going to sue him for defamation. 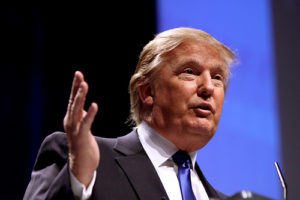 She claims that because Trump didn’t apologise for calling her a liar, then this somehow means she needs to sue him. I’m no law expert (I’m really not, so if I am wrong please correct me here), but in order for her to prove he defamed her, she has to prove she wasn’t lying. How can she do that if she has no evidence that he sexually assaulted her? According to US law, in order for her to win the case she needs to prove that Donald Trump:

Can she prove he made a false statement when he called her a liar? If she can, why has she not provided the evidence of this to the authorities? Why is she not suing for sexual harassment as she is entitled to do?

The level of arrogance it takes to make this lawsuit truly beguiles me. Men’s lives can be ruined by false rape and sexual assault claims and this woman has the nerve to complain that Trump called her a liar for accusing him without evidence. If she has evidence that he assaulted her, she is more than welcome to present it. The fact is, she likely has none. If she had more than her word, Trump would have had something to worry about with the original accusations, but he doesn’t. So Trump calling her a liar seems both appropriate and more than warranted.

The list of women who have accused Donald Trump of sexual misconduct is long, but this is evidence of nothing other than the fact that women have made accusations against him. It doesn’t matter if thousands of women accused him of assaulting them, if none of them can provide evidence of him doing so, then he must be presumed innocent. This is how the burden of proof, and the principle of innocent until proven guilty, work.

Which brings me to my next point.

Since Trump won the election, we have seen an almost endless cacophony of articles about people having to “cope” with Trump’s election because of the chance of “increased violence against women”.

So it came as no shock whatsoever that a new poll got released showing that, since the election, people are now more worried about sexual assault in the United States.

From The Age, via Reuters:

“Mothers in the United States are teaching their children about sexual consent and assault following President-elect Donald Trump’s boasts about groping women, according to research published on Tuesday.

“Roughly two in five US women think that women are more likely to feel unsafe and men more likely to feel entitled to treat women as sexual objects since Trump was voted into office on November 8, the poll by PerryUndem, a non-partisan Washington-based research firm, showed.”

The Left will no doubt take this as a sign that it’s Trump’s election alone that has got people scared, but given the fact that they have done nothing but attack and smear him for months now, is it any surprise at all that people are more worried than before? Being more worried doesn’t mean there is something that is worth being worried about. It just means they are more worried. Can you blame people for being worried when they are being told endlessly that they should be?

The fact that the numbers aren’t higher could well be yet more evidence to show that the media are, in fact, losing influence.

What is truly worrying is that this increase in fear came as a result of Trump’s election, who admittedly said some rather crude things, yet it hasn’t come from the rise of actual rapes by a certain community that shall go unnamed.

There is a genuine rape epidemic going on in Europe, and the Left wing media don’t seem to care about it one bit. I wonder, if Americans were more informed about what was going on in Europe they might think twice about protesting Trumps inauguration? I wonder, if Americans knew about Islamic attitudes towards certain things, like rape and homosexuality, whether or not they would be as tolerant as they are towards it?

The Left are more than happy to smear Trump with, most likely, false accusations of sexual misconduct, whilst hiding behind political correctness whenever it comes to criticism of actual rape culture. Where were the Leftist media when it was found that authorities in the UK refused to do anything about a migrant rape gang for fear of being labelled racist? Did they admit they were wrong to label any criticism of Islam as “racist” or “bigoted”, or have they simply doubled down on their blind rhetoric?

It may well turn out that Trump did indeed sexually harass some women; anything is possible. But until proof beyond reasonable doubt of this happening is presented, we are obliged, as critical thinkers, to assume he is innocent. One thing is clear, there really is a reason to be more worried about sexual assault. The problem for the Left is, it has absolutely nothing to do with Donald Trump.