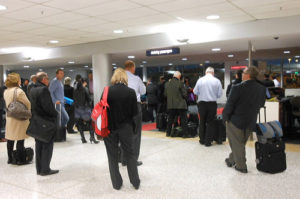 This morning I picked up the good wife from the airport. It took her almost two hours to negotiate immigration, collect her baggage, and pass through customs. Australia’s bureaucratic nightmare at border control is similar all around the country. Huge lines to get through immigration to those not holding an Australian passport. But once successfully negotiated, you still need to get your bags and get through customs.

In Melbourne this is simply a joke. The line to clear customs at times snakes its way back through the baggage carousels in a fashion that changes every time I come through. It is an organic process due to the complete lack of organization. The airport cannot handle the volume of people passing through the checkpoint.

The design continues in its inept behaviour as you pass into arrivals to be greeted by whoever has braved the idiotic parking to come and pick you up. The arrivals area is so tiny as to be beyond belief. At times the crush is worthy of airports I have seen in East Africa. Not to mention the fact that there are two exits which are out of line-of-sight of one another. Your loved ones have a 50/50 chance to get it right. Sure they can look at the overhead monitors, but that would mean that they’re not looking at the gate in front of which they’re standing. Blink and you’ll miss it doesn’t even come close to describing this debacle.

When passing through other countries’ airports such as Singapore, Milan, or Amsterdam, as I have recently done, the comparison with Australia’s processes is stark. We are, at best, a second world country, due to the fact that we are not even close to matching the efficiency and professionalism of other nations. An airport is the doorstep at which international visitors come into contact with Australia. They would be forgiven for thinking that they might have taken a wrong turn somewhere and ended up in a country whose name ended in ‘-stan’.

Airport customs officials appear divided between those who are always almost one step short of a scramble as they struggle to deal with the myriad of inefficiencies and bad design, and staff who have given up and simply no longer care. I find it hard to blame them, although I still do at times.

The short-term parking wins the award for ‘parking layout best designed to make no sense at all, whether you’re driving a car, walking to the airport, or trying to find a way back to your car with an annoyed person who has just had to negotiate the hell that is the airport itself.’ After all that, you can then pay the extortionate parking rate on machines that do not accept card payment. You can only pay in cash. You better have a lot of cash with you. Mind you, the only cash machines are somewhere back in the airport itself. The machines also only give change in coinage.

It is simply one more inefficiency that all build up together until your nerves are on the verge of snapping. On my way to pick up the good wife I received the message that she was stuck in the “longest immigration queue I have ever seen.” Apparently the line went all the way back past the duty free area. I pulled off the freeway and after a bit of back street searching I located a little spot where I could purchase a newspaper and get a coffee.

Almost two hours later she called me to let me know she was through. I drove into the arrival pickup area where drivers have exactly one minute to collect their passengers. She was nowhere to be seen. I got out of the car. A security person snarled at me that I had forty seconds remaining. Frantically I called the good wife. She was standing fifty meters away at the other pickup area that was out of line of sight of the one I was in. Just one more design feature of what I consider to be the very worst international airport in Australia, if not the entire Western world. 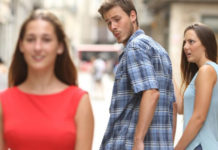