It seems we are through the Looking-Glass yet again, in the latest attempt by the MSM and the Democrats to make someone else responsible for Clinton’s loss; now it was the Russians. 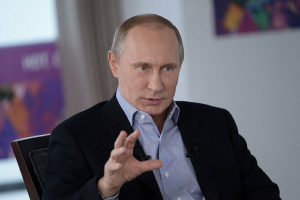 The source of allegations is a secret assessment by the CIA that was part of a closed-door intelligence presentation to US Senators. The Washington Post reported that the CIA assessment concludes the Russian Government wanted to help Trump win the presidency, and it directed ‘identified individuals with connections to the Russian government’ to provide to WikiLeaks the emails it subsequently released that were so damaging to Clinton. However, the CIA assessment is not a ‘formal US assessment,’ as not all of the US intelligence agencies agree. The point of contention: ‘intelligence agencies do not have specific intelligence showing officials in the Kremlin “directing” the identified individuals to pass the Democratic emails to WikiLeaks’. So the CIA says the Russian Government directed interference in the US presidential election by presumably orchestrating the hacking of the DNC, and directing that the information be provided to WikiLeaks, except that other agencies do not agree because there is no actual evidence that the Russians directed any such thing.

And there is another small problem: WikiLeaks has categorically denied Russian involvement as the source of the hacked emails, and if anybody knows the source, it is Assange and WikiLeaks. The allegation of Russian involvement floated around the Presidential election campaign, in various forms, for some time. In early November Assange responded to the claims of Russian involvement in emphatic terms, when he said ‘Clinton camp has been able to project a neo-McCarthyist hysteria that Russia is responsible for everything … that’s false; we can say that the Russian government is not our source’.

Unsurprisingly, and perhaps predictably, the Russian Government has also denied any responsibility or that it was involved.

Trump has painted the allegations as yet another Democrat tactic and says that the leaking of the intelligence presentation is politically motivated ‘because they [the DNC] suffered one of the greatest defeats in the history of politics in this country’. As to the allegation of Russian involvement itself, Trump said:

‘If you look at the story and you take a look at what they said, there’s great confusion. Nobody really knows, and hacking is very interesting … Once they hack if you don’t catch them in the act you’re not going to catch them. They have no idea if it’s Russia or China or somebody. It could be somebody sitting in a bed some place. I mean, they have no idea.’

All of that is conclusive of precisely nothing, and unless the CIA assessment and the demurrers by other agencies are released, and can be judged on their own terms, there is nowhere for this controversy to go. Except that the usual opportunists in the MSM, and establishment politicians opposed to Trump, including no less a person than John McCain, have leapt onto this poorly-inflated life raft for their own ambitions, and decided to give it currency by calling for a sub-committee of the Senate Armed Services Committee to further investigate Russian involvement, and Obama seems happy to hop along for the ride. McCain says he wants to make the investigation non-partisan, but at the same time he says that he is concerned about Trump’s ‘posture’ toward Russia, a suggestion pregnant with the implication that Trump and Russia have something in common. Since Trump has made it quite clear he wants better relations with Russia, the cause of McCain’s concern isn’t immediately apparent, at the least to those of us who would prefer peace to something rather more disruptive.

And of course, at the basest level, the allegation makes no sense at all. The Democrats and the MSM have repeatedly told us that the WikiLeaks documents, the authenticity of which has not been questioned, disclose nothing about which we should or could be concerned. If that is so, it seems particularly poor ammunition to use when going to all of that trouble to influence a presidential election.