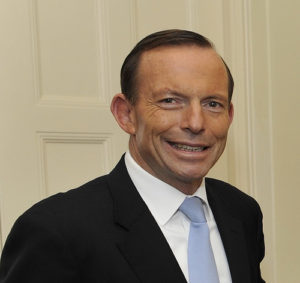 Tony Abbott has told right-wing allies in Britain that he believes he has a reasonable chance of becoming prime minister again, Fairfax Media has learned.

Of course, this was immediately and predictably refuted by the former Prime Minister:

Mr Abbott took to Twitter to reject the claim: “As for unsourced, unattributed, unprofessional reports, the journalist in question is yet again making things up.”

This is of course hilarious; anyone who seriously believes that a man who has spent his entire career in politics has somehow lost his taste for the highest office, of all probably should be disqualified from voting.

Andrew Bolt, long one of Tony Abbott’s few backers in the media, didn’t believe that Abbott would be so indiscreet at a conference full of potential “informed sources” and he’s probably correct in that assumption.

Abbott has already shown quite a bit of talent in the backroom arts of politics and probably wouldn’t give the game away quite so sloppily. It’s far more likely, considering the subject matter and the well known leftist proclivities of Latika Bourke, that this was a leak manufactured by an ever more unstable, unpopular and paranoid Malcolm Turnbull.

But does it matter?

If Tony Abbott became Prime Minister tomorrow it would be a great psychological relief to me and to most right-of-centre Australians; the cuckoo being forcibly thrown from the nest would be a joy to watch.

But what would change?

Abbott would be leader of a party whose parliamentary representatives are increasingly not only of the same class and caste as their supposed opposition but also of the same worldview.

Every graduating class from our universities over the course of the last half century has been further to the left and more believing in the absurdities of progressive ideology than the last.

Social workers, teachers, lawyers, journalists and politicians have all been educated from early adulthood, if not before, to see the unparalleled achievements created in this barren land through the sweat and blood of our ancestors as at best a joke, and at worst a reason for shame.

Our universities are infested with the lice left over from the Cold War. Chewing their spleens over and over attempting to convince themselves that they aren’t filled with sorrow for the end of the red banner and the great slave empires it ruled over.

Nearly our entire middle class have been educated into sheep, even those who consider themselves “Conservative” now make excuses for absurdities like same-sex marriage and transsexual four year olds, convinced that if they just give in to the ranting extremists on every new absurdist social issue, the establishment might give them a tax cut and allow them to keep a little more of their own money.

Thanks to both left and the pretend “right” we now have immigration in the hundreds of thousands, supported by massive taxpayer funded schemes to ensure the non-assimilation of even the most alien cultures, supported by a taxpayer funded education system that teaches the children of these migrants that they have no need to identify with the country that took their parents in.

Every year the government spends more and more money creating an ever more dependent populace. We have over half a million Australians on the disability pension, a joke easily manipulated by those who wish not to work even before the arrival of the multi-billion dollar boondoggle of the NDIS.

Our public service unions demand ever more blood from the taxpayer stone, and both Liberal and ALP governments continue to provide, terrified of the response from the media and the reaction of ever more coddled voters to the smallest imposition on their lives.

The upper hierarchy of those entrusted to maintain law and order and to protect our borders now care more about maintaining leftist orthodoxy and drilling it into those under their command than fulfilling their duty to the public. Our citizens stand disarmed and helpless while those we pay to guard us while we sleep attend diversity seminars.

And to complete the farce we have laws on the books that increasingly redefine the boundaries of acceptable “Free Speech” and unacceptable “Hate Speech” to mean whatever the Left decides they mean this week.

What would an Abbott at the helm do to fix any of this?

What would changing the captain of the Titanic matter when the iceberg has been hit and the ship is already sinking?

If there is any hope at all it lays in the fact that despite the avalanche of corruption that lies heavily upon us there is still resistance. Despite the complete control the left has over the public square, there are still some willing to fight back. There are still voluntary collaborations like XYZ out there telling the truth and holding up a mirror, be it ever so small, to the foul ugliness the establishment have created.

There are still politicians outside the major parties willing to point out the nakedness of the emperor and still hundreds of thousands, perhaps even millions of Australians willing to vote for them.

Despite the darkness, despite all the genuine causes for despair, the spirit of our nation survives, and while that spirit lives there is hope.

But as the eventual return of Abbott looks more and more certain with every clumsy misstep of his usurper, it is important to remember: Abbott isn’t the answer to anything.

A more palatable arrangement of deckchairs won’t stop the ship taking on water.

Those on the right in this country desperate for hope have seen too many false dawns.

This time I truly believe that we won’t be fooled again.