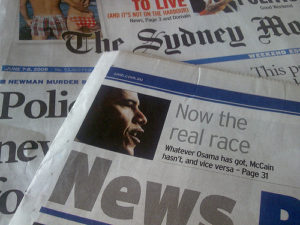 After just reading yet another Fairfax hit piece on Donald J. Trump at SMH online, and reading scores of comments below the article correctly and astutely identifying it as nothing less than a hit piece, I wondered if we were all being paranoid. Surely there are many articles critical of Hillary Clinton in their archives?

The easiest way to find out, (I encourage you to repeat this experiment, and give us your thoughts in the comments) is to type ‘Hillary Clinton’ into their search field, then compare the results to typing in ‘Donald Trump’.

I began with Clinton. There are 12,480 articles, with 15 results per page. The first 15 results are all either glowing endorsements of Hillary (including carefully manipulative press releases), or damning articles about Donald Trump. The first negative headline concerning Hillary appears as search result 27, but the story itself is framed as a positive about how an empowered Hillary deals with her husband’s infidelities.

I gave up after being unable to find a genuinely critical article in the first 135 results, but I’m reasonably sure that the trend continues unabated. All of the headlines are unashamedly pro-Clinton. Those that weren’t were mainly negative pieces about Trump that came up because Clinton was mentioned in the article.

Things vary dramatically when you repeat the exercise with ‘Donald Trump’. The very first page of 15 results are a collective of damning headlines about Trump, pro-Hillary pieces, satire that ridicules the Republican candidate, and an all important celebrity dis-endorsement from Cher.

The rest of the search results border on the ridiculous, and often read like headlines from the National Enquirer or Weekly World News. Here’s just a taste of what is to be found in the SMH search results:

Trump is inexplicably dragged through the mud for off the cuff remarks about the Amanda Knox case years ago. Trump allegedly flirts with white supremacists (no mention of Hillary’s Klan ties). Pepe the Frog, once Used By Trump is Listed as a Hate Symbol.

When they aren’t being completely childish and silly, the headlines are just being inaccurate, make deliberate omissions, or are just plain mean. The meat and potatoes revealed by DNC and Wikileaks hacks are completely overlooked by SMH and instead are used to allude to fanciful Trump/Russia ties. Revisionist reporting hails the lady that can’t fill a gymnasium as being more popular than the the guy who’s turning people away from stadiums. And Trump consistently gets meaner headlines than we ever saw about Osama Bin Laden in the left media.

I had almost given on looking for any article that could even be deemed as impartial toward Donald Trump, much less positive about him by the time I had scoured through 135 results. I finally found one at search result 137 with ‘The Questions that Clinton and Trump Need to Be Asked’. At face value, it seems impartial, but somehow manages to come up with national security questions that need asking of Hillary while never mentioning emails or Benghazi. It’s a soft pitch.

Things get really interesting when searching SMH for articles about the Clinton Foundation. The default search option is ‘Newest’ as you’d expect, so virtually every article is a hit piece on Trump that mentions the foundation only in passing.

To find actual information on the Foundation, you need to click ‘Most Relevant’. The first and most recent result is April 22nd 2015, which is telling. This was a time prior to #NEVERTRUMP when actual critical analysis of Clinton was still on the table over at Fairfax. Hillary Clinton was deeply unpopular with the left, and they no doubt held out hope of a more suitable candidate, so were understandably fine with harming the chances of a Clinton dynasty back then, perhaps hoping for a less Neo-con, less hawkish candidate.

When it became clear that Clinton was ‘their guy’, and that a New York Businessman had Trumped all of their preferable cuckservatives who like Clinton were equally enamoured with open borders, raw trade deals, and politically correct groupthink, any critique of what was arguably the most concerning conflict of interest for a Clinton Presidential run evaporated at SMH, as with so many other MSM sites with no further mention of the Clinton Foundation.

By contrast, search for ‘Trump Charity’ on SMH, an election topic that doesn’t even register on the radar compared to walls or racist accusations, and you’ll find scores of tenuous stories that pale into insignificance compared to the nefarious goings on at the Clinton Foundation, yet somehow warrant regurgitating again and again in case we missed it right up until a week ago.

SMH will no doubt accuse sites like Breitbart and XYZ of similar crimes against impartiality. But there is a difference. Sites like Breitbart and XYZ have a different charter to SMH. Most of our articles are opinion based. We do not feign impartiality despite being unashamedly partisan. XYZ’s charter is ‘Restoring Balance to the Australian Media’. This is a recognition that the pendulum has swung far to the left, is stuck there, and needs to start swinging the other way.

We make our leanings clear. There’s a good reason why you always hear the term ‘right-wing media’ brought up in left-wing media, but will never hear them identify themselves or their peers as ‘left-wing media’. They are so heavily indoctrinated into the movement that they actually do believe themselves to be completely impartial, even as they virtue signal and parrot left doctrine in their articles. As we have seen, a few cursory searches pertaining to the current U.S. Election cycle prove that impartiality isn’t to be found at Fairfax in practice, despite being part of their charter.
A visitor to Breitbart or XYZ will be left in no doubt as to their leanings after perusing either site for a few seconds. A visitor to SMH will take their claims of impartial reporting at face value, and even the occasional anomalous cynical website visitor will need to do a lot of scraping beneath the surface to find the same smoking gun evidence of entrenched bias that we’ve seen here.

This isn’t a case of a candidate who is ‘literally Hitler’ versus a flawless angel naturally being the subject of more damning articles, regardless of how many MSM outlets will try to push this angle. Neither candidate is perfect. Both have skeletons in the closet that need to be addressed by responsible media outlets who claim to be impartial. But over at SMH, as with the majority of the MSM, they seem to be gleefully rummaging through Trump’s closet hurling skeleton after skeleton out onto the floor while they are straining to shove a heavy hardwood dresser in front of Hillary Clinton’s closet door.

It’s Your XYZ… Proudly and Openly Transparent in Our Leanings.