I used to like The Spectator. It was my favourite political periodical after the sadly defunct Bulletin. It could always be relied on for genuine conservative coverage with an emphasis on the U.K. ‘Used to’ and ‘could’ being the operative words. In recent times, The Spectator has become conservative in much the same way as Malcolm Turnbull is conservative. It’s all about convenient branding with very little substance or conviction. The Spectator used to be a firebrand conservative media outlet like Brietbart. Now it just stands #withher, The Guardian and other left wing rags hurling stones at Brietbart like an overzealous Sharia compliant villager.

I can’t bring myself to pay for a dead tree copy of the Spectator anymore, but I read an article entitled, ‘How Donald Trump Shacked Up With the Alt-Right,’ by Spectator contributor Jack Hunter in the Coffee House section of their website.

Yep, that’s right. The Spectator are now so indiscernible from left-leaning 60’s Beatniks that they even have a navel gazing virtual coffee house from which to pontificate about the social justice nonsense they seem to be slowly warming to.

Jack Hunter doesn’t like Trump. That’s fair enough. A lot of the conservative establishment don’t. He’s brash and loud. He’s an unknown quantity. He threatens to upset the status quo, and has highlighted the areas in which the political process needs reformation. If I were a paid-up journalist in a traditional conservative media organisation, I’d probably be afraid of Trump too. He threatens to make The Spectator and Fox News obsolete by virtue of having no real use for them. It’s the way in which conservative journalists don’t like Trump and the strange bedfellows that they choose that is most disconcerting to those of us who lean that way.

Hunter trots out all of the same tired leftist pejoratives that you’d read in any Trump based article on Salon.com. It’s a cavalcade of virtue signalling. Racist, fascist, anti-minority, anti-Muslim, anti-Semitic… Hunter even manages to trot out a holocaust reference, conveniently forgetting Trump’s Jewish family connections. If you were to point these out to Hunter, he’d no doubt regroup and change the subject to Palestinian oppression and rattle off some anti-Semitism of his own. 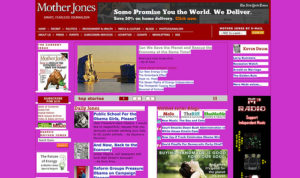 The most ridiculous point in the article comes when the journalist cites a piece by Sarah Posner in Mother Jones that validates his concerns. Mother Jones. Let’s just digest that for a second. Mother Jones is a Cultural Marxist rag that even a lot of leftists find too extreme and ridiculous. How left is it? Well, Michael Moore was the editor for a time, which speaks volumes.

How left is it? They published an article defending the black guy who was shot in Milwaukee after pointing a stolen gun at a (black) cop because he was discriminated against due to the fact that he couldn’t get a carry permit to legally pack heat due to bi-polar disorder (apparently their line is that whites with mental illness should be subject to second amendment restrictions, but cultural relativism should be in place to allow mentally disturbed blacks to become spree killers). Proof that even the most regressive of leftists occasionally find themselves on the same page as the NRA when identity politics allow for it.

How left is it? Well one of their latest articles claims that the Louisiana flooding isn’t actually that bad compared to Katrina or Sandy, the implication being that it’s totally cool for Obama to put the region on the back burner while he golfs, but by the way George W. is still a bastard for the way he handled his respective natural disaster. Bush wasn’t golfing or anything at the time, just mishandled things. At least he tried. But it doesn’t matter, because… Republican.

Jack Hunter can and does slag off Breitbart all he likes in the article. But it just comes across as the death rattle of a publication that has inexplicably made itself obsolete by design at a boom time for dissent against political correctness.

Breitbart saw record web traffic these past few months. A veritable explosion. The Spectator has drunk the cultural Marxist Kool Aid and seems to think that it needs to adapt to an ideology that is already fraying at the edges and falling apart (as anything beholden to identity politics is hard-wired to do eventually). A house divided will not stand.

It’s no coincidence that The Spectator is struggling in an environment where it should be thriving as much as Breitbart is. Nobody expects them to keep doing what worked twenty years ago. Change is needed in any organisation for it to prosper. But it needs to be the right kind of change. Conforming to fit a mould that everyone was too afraid to question in 2006, and looking to the worst kind of radical leftist publication that helped to engineer that mould for validation, is the most pathetic kind of pandering.

The Liberals already tried pandering to a fringe group that would never patronise them in a million years by ordaining a Prime Minister who was the darling of the Q&A set. It doesn’t work, and isn’t becoming. The Turnbull government was justifiably punished for capitulating to a loud and vocal minority. The Spectator would do well to learn from this mistake. Their shameless Bremain propaganda during the Brexit campaign was the Canary in the coal mine. Their regard for Mother Jones as a reliable source and ally is the frog slowly boiling in a beaker above a Bunsen burner.

If you identify as centrist, libertarian, or conservative, and you’re looking for some firebrand English/European political commentary, The Spectator is sadly no longer the place to be. They’re going the populist route. The only problem is that it’s the leftist populist route of 2006. You’d be better served checking out XYZ’s excellent Brexit coverage by David Hiscox, Keating, or Ryan Fletcher’s latest piece on George Soros. You’ll never hear us heaping praise on Mother Jones here. Or if you really want to upset Jack Hunter and other Cultural Marxists in conservative clothing over at The Spectator, visit: http://www.breitbart.com/london/