Who needs media censorship with a media so willing to censor itself? 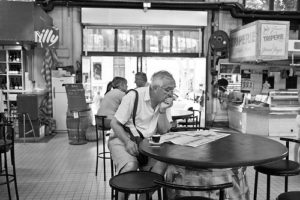 In the wake of the latest wave of Islamic terrorism – which, beginning with the massacre in Nice that killed 84 people, has seen seven attacks carried out across France and Germany in the space of a fortnight – several prominent French media outlets have made the extraordinary decision to no longer publish the names or photographs of those responsible.
The near uniform justification given by the likes of Le Monde, BFM-TV and Europe 1 radio has been the ostensibly noble motive of avoiding bestowing “posthumous glorification” on those responsible.

But viewed in the broader context of the dominant media trend of denialism, which has seen former Republican congressman David Stockman dismiss the actions of Nice terrorist Mohamed Lahouaiej-Bouhlel as the “demented suicide of a mentally impaired wretch” and “not a planned jihadi terrorist attack” (despite all evidence to the contrary) and the BBC laughably attempt to spin the facts of the Ansbach suicide bombing under the title “Syrian migrant dies in blast”, it’s hard to view this self-imposed blackout as anything other than what it truly is: perhaps the most blatant attempt yet by the media to disguise the abundantly clear link between Islam and the ever-growing terrorism threat in Europe.

After all, we’re always reminded in the immediate aftermath of these incidents not to point fingers until all the facts are revealed. What better way, then, to prevent the drawing of any unpleasant conclusions, however accurate they may be, by suppressing the facts altogether?

That one of the publications to fall victim to this collective fit of self-righteousness is Catholic newspaper La Croix, beggars belief in light of the latest of these Islamist attacks, the brutal slaughter of an 86-year-old priest in front of his Normandy congregation, which must surely be viewed as a direct assault on the Catholic faith and its values.

It’s a combination of counter-intuitiveness and complete apathy towards self-preservation bested only by John P Sundholm, who inexplicably managed to use the Pulse nightclub shooting as a platform for launching a tirade against both homophobia and anti-Islamic sentiment while completely overlooking the direct link between Islam and hatred of gays.

These people need saving from themselves almost as much as they need saving from Islamic extremists. In the meantime, this latest spin tactic seems far more likely to fuel the public’s growing distrust of the media elite than to temper any concerns over the impact of Islam on the West.