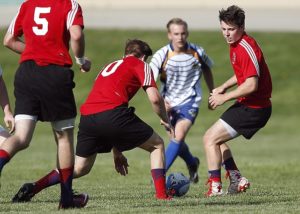 Presently, you cannot seem to avoid the many news articles broadcasting the apparent creep of political correctness into our schools. You could be forgiven for feeling like all of the schools in Australia seem to be doing anything but teaching the basics, the “three Rs”, and Science, Politics, History etc, and doing everything to teach our newest generation about gender studies or whatever else is the latest social theory fad. At the bottom of every online news article into this subject you can quickly find many voices decrying the deterioration of the quality of education in our schools and the decreasing competitiveness and metrics of our education system when compared to other nations.

Why is this happening? I theorise that it is being caused by several factors:

Firstly, we seem to be more interested in making our teachers quasi-parents by expecting them to do the hard elements of parenting, i.e discipline, gender education, social conventions, answering those pesky, “but why?” questions while driving the car home after a long day…

Teachers are exactly that: they teach your children and educate your children about subjects they need to continue in the education system and eventually be employable in the workforce. Parents cannot continue to absolve themselves of more responsibility by continuing to ask more of the Public Education system and the teachers and administrators that work within it. Your responsibility by bringing a child into the world is to raise it – it is no-one else’s responsibility or job to do that for you. But if you want to pay for your own children to be taught by a school of your choice, that is a question for the Private education system. If you have an issue with what is being taught, exercise your democratic right to change the system, or vote with the power of the dollar and move schools.

Secondly, our curriculum is a battleground of political thought. There are significant amounts of stakeholders involved in the development of the Australian curriculum, and all of these people want different things. Powerful teachers Unions and the Left will seek to manoeuvre the curriculum toward their own ends, the Right generally to the opposite. But all of this is detracting from the primary audience: the next generation of Australians. We need to be empowering them for the future, whilst providing them with the opportunity to think independently and scrutinise what they are being told.

The Teachers Unions are protecting their people and their jobs. Teachers need the Unions because they are not well paid, they work very long hours (in the case of classroom teachers) and they are vulnerable to parents taking them to task for being negligent for the rising amount of reasons directly linked to increasing imposition of parenting responsibilities on teachers. Teachers want a safety net because they are often not interested in fighting battles with parents in courts of law; they do not have the resources to do it themselves.

Teachers are also losing the ability to discipline children due to a reversal of trust within the teacher-student-parent dynamic; what was once a parent trusting the teacher and blaming their child for their results has polarised to a situation where parents are now blaming teachers almost exclusively for their children’s results. This phenomenon is stripping teachers of authority and their precious mandate from parents to teach their children with their trust and support.

Thirdly, our budgets and funding are also intertwined with politics. The Gonski Review called for redistribution of funding to schools with disadvantaged students and lower results over others in a better position with higher performing students and better facilities. While the public system does exist for everyone who wants to use it, it doesn’t seem like throwing money at the problem of poor results and disadvantage is the proverbial silver bullet. In a move typical of the left of politics, the unions and Labor got behind Gonski, hoping to glut themselves on more money to create more bureaucracy, more inefficiency and more waste, for the sake of trying to help some kids whose circumstances are nobody’s faults except their parents. You can’t protect everyone. You also can’t fund responsible parenting.

I will agree with the notion that it is somewhat optimistic at best to think that education of the young will never be a target for politicians and academics pursuing their own version of utopia. But one of the things that we must preserve is freedom of thought and freedom of speech. That starts at school through things like debating, political education and philosophy. Not through gender theory and censorship of controversial ideals. It has to be well rounded. It must educate on the past from many perspectives. We must preserve the ability for people to hear things that resonate with them and things that do not, they challenge and anger them. Why?

Because if we don’t, we are allowing our future generations to be sheltered from a world that, when it comes to the crux of it, doesn’t care about our feelings. We have existed in a society that has sheltered us for so long from the horrors of bloody conflict and injustice. We do not know the cost of war. Many of us do not know what it’s like to live in a time of true economic hardship like previous generations. We have allowed ourselves to become so comfortable that any notion of sacrifice is dispelled and borderline punished for venturing such a preposterous suggestion. It is time for us to do the lifting in Australian society, and that started when we joined the workforce en masse. It continues when we become parents, because we inherit more responsibility for the country. Don’t let the lucky country go to waste – let’s make it great and lead the way.