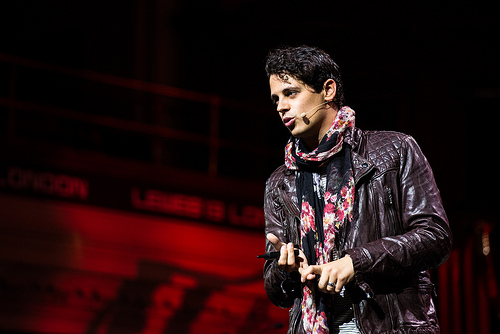 Today, Milo Yiannopoulos was interviewed by Andrew Bolt on Sky News.  The discussion between the longstanding conservative stalwart and the new conservative rising star covered some diverse topics:

Same-sex marriage – Yiannopoulos believes there should be a government mechanism for homosexuals to formalise their relationship.. he just doesn’t think they should do it.  He views the left as attempting to domesticate gay people, to put them into a bloc; in the past, homosexuals have been over-represented in creative fields because they don’t have the usual responsibilities of married straight people.

Islam – he discussed the inconvenient truth that 100% of British Muslims interviewed a couple of years ago in a gallup poll said they believed homosexuality was an immoral lifestyle, and half of them believed that it should be illegal.

Christianity – he pointed out that it has been reasonably tolerant at times to homosexuals, and has a far better track record than the religion of peace.

“Progressive” control of institutions – the ridiculous situation that exists today whereby to keep one’s job in the media, you have to say things which nobody believes are true, like the ideological construct that Bruce Jenner is a woman.  In essence, there  is a “gap between what we are forced to say and reality.”

Andrew Bolt posited to Milo that he is a “walking contradiction of modern identity politics.”  In this, Milo joins a long list of people whom the left have designated as belonging to a “minority” which should vote left and believe in left-wing ideals, but have broken this mould, and thus gained the left’s hatred, and the right’s admiration; Margaret Thatcher and Thomas Sowell come readily to mind.  As such, he the embodiment of the political wedge.

Milo summed it up best, and earns The XYZ Quote of the Day, with the following:

“I’m only a mystery to you if you have internalised things that the left have told you about homosexuals which have simply never been true.”

With this, Milo Yiannolpolous articulated his determination to resist the left’s attempt to divide Western society into smaller and smaller conflicting groups, so that they can be controlled by the State.  In doing so, he exposed the true restrictive, stereotyping bigotry at the heart of Cultural Marxist ideology.