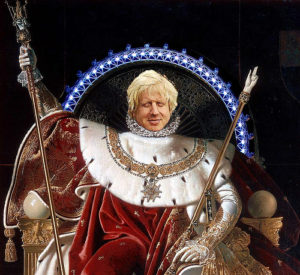 Let’s get today’s Quote of the Day over and done with, and then take a brief look at what it means. Here is the opening sentence from their-publicly-funded-to-the-tune-of-$1-billion-a-year ABC, from an article today regarding the appointment by Great Britain’s new PM, Theresa May, of Boris Johnson as Foreign Secretary:

“In Boris Johnson, Britain has appointed a liar with his back against the wall as its new Foreign Secretary at a time when somebody reliable is needed in the role, his French counterpart Jean-Marc Ayrault said.”

The headline itself read:

‘A liar with his back against the wall’: World reacts to Boris Johnson’s appointment.

For those of you unfamiliar with the term, this is what us amateurs in the newspaper business call “bias.” One might defend their ABC’s opening paragraph on the grounds that it is not so much bias, as wanting to find the most engaging tidbit to invite its readers to read their article. In response, one might suggest that this is a little bit “tabloid.” Perhaps, even a little bit “clickbait.”

To follow up this irrevocable framing of the issue, in an attempt to paint a man who dealt such a dastardly blow the left’s eternal dreams of a borderless, nationless world, in as bad a light as possible, their ABC cites Turkish officials who are apparently furious at Boris’s lampooning of Turkish Prime Minister-cum-dictator, Tayyip Erdogan. No mention is made of the way in which Erdogan has been steering his country toward authoritarianism, religious fundamentalism, and even support for the Islamic State. We mere amateurs in the newspaper business sometimes refer to this as context.

Instead, their ABC appears intent on painting Boris as an out-of-his-depth yokel, who takes away their nice things, lies, insults foreign dignitaries and invites ridicule across the internet. Meanwhile, what the ABC and all the socialists who continue to pour invective upon him forget is this: Boris won Brexit.

That is what we amateurs in the newspaper business sometimes refer to, as a “democratic mandate.”

Photo by Matt From London

The men only political party