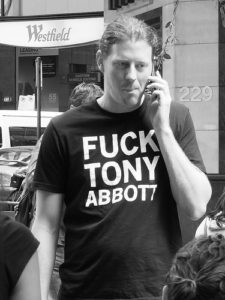 Imagine explaining modern Australia to a time traveller from the 50’s.

Yes the 50’s, that oft maligned decade that seems to haunt the dreams of leftists with such atrocities as white picket fences, full employment and intact nuclear families.

How would you explain the Safe Schools program? That Communists who were our clear enemy then are now so deeply entrenched in society that we actually put them in charge of teaching our children both the history of their nation and culture and that their biological sex is nothing but a malleable social construct that they can, and should, change?

Not to mention that when one of the monsters responsible was given a short suspension from taxpayer employment for expressing support for Marxist revolution, she was welcomed back with a guard of honour by her colleagues, and lauded by both the public broadcasters as well as in more than half the newspapers in the nation?

How would you explain the fact that not only has our country imported a highly antagonistic alien religious group with a history of integration issues elsewhere, but encouraged them not to assimilate and in fact gave them money not to do so, creating ghettoes in our poorer suburbs that inevitably bred crime and extremism and that mentioning any of this publicly can get you fired from your employment and thrown out into the societal wilderness?

How would you explain to this unfortunate traveller in time the numerous topics which one may not comment on or protest about without risking bringing on the violence of black masked, hate filled thugs funded in part by your own government while the “Progressive” press cheers and the milquetoast “Conservative” press declares both sides responsible?

The traveller would of course have been aware of far left union thuggery in his own time, but not that of mobs of the children of the privileged classes striking out with boots, fists and iron pipes at anyone who transgressed on state sanctioned ideology.

How would you explain sending soldiers overseas to fight enemies they are allowed to shoot but not joke about? An enemy whose body they can fill with shrapnel, but whose backwards and often disturbing culture they can’t even criticise without career death? And God help a soldier in the heat of a fire fight if someone catches them using an ethnic or religious slur as bullets zip past their head.

How can you explain that this Australia exists after a supposedly conservative Prime Minister ruled for over a decade?

How would you explain our tax dollars funding the perversion of our children? How the brightest students are sent to universities where they are taught to hate their own nation, their own culture, their own history?

How would you explain the means the government uses to envelop us every year in an ever tighter web of rules and regulations about every aspect of our existence?

How to make him comprehend the fact that we continue to give more in taxes every year to the cultural institutions our ancestors built, only to watch those same institutions turned into weapons to attack everything we hold dear?

That the roughly half of the population that still objects continues to vote for “Conservative” parties that have clearly failed to conserve a damn thing?

That after suffering every period of leftist rule we vote in a collection of self serving pocket stuffers from the Liberals and pork barrellers from the Nationals who do nothing to reverse the cultural decline or roll back the social engineering that brings this nation closer to disintegration year by year?

Then explain that despite how angry you were about your country and the failure of the Liberal and National parties to do almost anything at all besides slightly slow the insane descent into the abyss you still went out on Election Day and voted for them.

Because that’s what millions of conservatives and libertarians on July 2nd will do.

And that’s why the right in Australia keeps losing.

And until that changes; we’ll continue to lose.