I remember seeing a motherly looking lady of advanced middle years, being beaten to the ground in Federation Square just over a year ago, by a jeering mob, for the crime of waving an Australian flag.

I remember watching a cheering throng, urged on by faculty and student union officials at La Trobe University, laughing and clapping as Marxist activists repeatedly kicked a be-suited dummy of John Howard in-between its legs, before hanging it by a noose.

I remember watching a small, weekday leftist demonstration of a few dozen well fed activists, burning an effigy of Tony Abbott in central Melbourne, one week after the election in 2013.

These same people, who burned an image of a man who hadn’t even had the opportunity to yet pass any legislation, had spent the previous three years complaining endlessly about the apparent “hatred” that the poor, sainted martyr Julia Gillard had been forced to endure.

After all, didn’t someone print a rude menu about her once? And hold up a sign calling her a witch? And didn’t that notorious sexist Abbott once look at his watch while she was speaking? 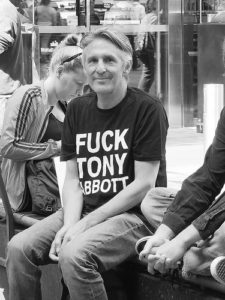 How could that possibly compare to “F— Abbott” T-Shirts being promoted by Fairfax? Decapitated likenesses on stage? Facebook pages promoting death threats being created at Geelong Trades Hall? Countless taxpayer subsidised banners in the street with Mr Abbott being hanged, burned to death and otherwise murdered?

This is not to point out the hypocrisy of the left; any reader of XYZ will already know just how blind the hate-filled haters of hatred are to their own deficiencies.

This is to question why Abbott in particular, and rightist figures in general, do so much to try to please people who base their entire identity on wanting anyone who disagrees with them humiliated, bleeding in the street, or dead?

Why did Abbott try so hard not to seem sexist, when it was clear for years before he became Prime Minister, that these ideologues would never allow him to escape this noose they had fashioned for him in a thousand classrooms, and with thousands more lines of print?

Why does the right allow the left to set the narrative? Dancing to whatever tune they please, writhing on our belly in the dirt before these self appointed arbiters of modern morality, to escape being called racist, sexist, or homophobic?

Regardless of the outcome of the US Presidential election, the rise of Trump has revealed that the imagined powers of our tax-fed cultural elites are mostly empty words. Illusions and paper tigers with only as much clout as we allow them to have.

The truth is, without our tax dollars, the high-and-mighty, self-righteous, sanctimonious sneerers would have no power at all.

No talking heads setting the narrative, no academics pontificating from on high, no black-clad thugs in the streets beating those who dare dissent.

So why isn’t defunding these leeches the main mission of all right-of-centre politicians and activists? Why did the Howard government spend its 2007 political capital on easily reversed Industrial Relations laws, while leaving the citadels of the Culture War untouched, and in some cases even buttressed?

Part of it is the fact that for so many conservatives and others to the right, it’s hard to see just how full of hate those on the other side are. We can perceive the fanaticism of an Islamic State Jihadist, but fail to see the same burning zeal, fevered brain and eyes fixed on a future-imagined paradise in the people all around us, our neighbours, our workmates, even the nice middle aged woman teaching our five year old at the local public school.

But these same people hate you so much that if you say the wrong thing, they will happily accept, and even work towards you losing your job, and being ostracised from society.

They will cheer as a privileged child clad in a mask and hood kicks you in the face, for the crime of thinking a sufficiently politically incorrect thing and saying so in public. Some will even curse and spit on the police for trying to protect you.

These people are all around us, some too scared or dull of thinking to do anything other than follow the herd, many others so corrupted by those who taught them and the culture that surrounds them, to be beyond any possible argument, logic, or reason.

They exist only because of the parasite establishment that feeds off the productive members in our society to sustain itself. An establishment that nourishes and protects its members by instilling in them an almost Gnostic hatred for everything that currently exists, and a love of an impossible paradise forever out of reach.

These people are far more deadly to our society than any Islamist; they are the gangrenous limb that kills the body.

Muslim extremists, for all their multitude of faults, at least have the decency to declare themselves the enemies of our society.

Until the many scattered, divided, and often disenchanted tribes to the right of the Australian political landscape find some party, movement or force to coalesce around, these hate-filled haters of hatred will continue with their mission to bully, cow, and intimidate all in our society to bend to their will.

It’s time to stop crawling for praise from people who hate us, time to stop being the “nice” right-winger who is sufficiently left-wing to get invites to be the baited bear on a stacked ABC panel, or the token dissident at an inner-city dinner party.

It’s time to realise just how much these people hate you and everyone like you with every fibre of their being.

It’s time to start fighting back.