I once was a student of Economics and Finance, and was intrigued by the imminent Euro currency.

In my naive synthesis of these two disciplines, I simply could not reconcile how the currency union would work, as it seemed to contradict some fundamental free market mechanisms relating to Monetary Policy, Fiscal Policy, and the interplay of these with a floating currency.

Now, at this point I have lost all but the avid reader, which is why the topic is so droll. But, this is not twitter and I do not seek to tweet twuths to twits, so on I go.

China artificially devalues its currency, through a form of peg* to the US Dollar, to keep it internationally competitive. In fact, a peg is what many countries do, and it is in effect what the Euro members are all doing. 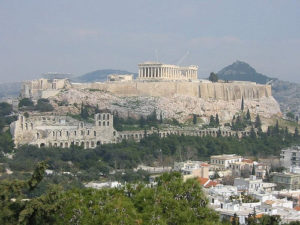 Now, the reason it matters can be explained through a simple example:

Imagine 3 countries who agree to a single currency

After 1 year, the differences are minimal, but after 15 years Pigsy is struggling, and only one in every two little piglets can get a job. They ask why, and Pigsy says it is something to do with the Krauts now being much more efficient than the little piggies. Worse yet, he knows it is going to get worse each year, and there is no way to fix it.

You see, the PIGS** cannot compete with Germany, so Germany is pegged to a cheaper currency, and the PIGS are pegged to a more expensive currency. As a result, German industry benefits while the PIGS wither.

What would normally happen is that the PIGS would devalue their currency and become more competitive, and the Krauts would see theirs rise in value, making them less competitive. Capital and investment would flow toward the PIGS, breathing new life into the economy and giving young malcontents jobs and hope – key ingredients of a future. (Hint to the EU – what do you really offer the PIGS apart from bailouts?)

This is what economists call an example of “the invisible hand” driving markets into equilibrium. Unfortunately, the EU and the Euro currency tie that hand behind the back, and a generation of youth will curse the right wing, and suckle to the entity that enforces their impoverishment.

To simplify the message – the Euro needs to be abolished at best, or as a compromise a two tier Euro currency should be introduced and backed by the European Central Bank. Such a system would group the inefficient and the efficient into a separate currency each, and allow free market forces to devalue the PIGS back into competitiveness.

It will hurt, but the alternative is to defer it longer, at which point the s— storm of a single currency between such diverse economies will erupt.

It is not a question of if. It is a question of when. Rest assured, no-one has the balls to do this voluntarily. It will have to happen the hard way.