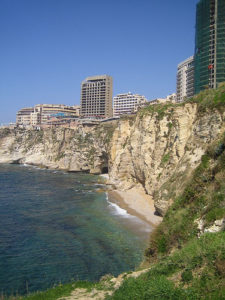 Here is a joint rant by Grumpy Motorist and David Hiscox, in response to an article by Ruby Hamad in Daily Life, in which she simplistically blames the fiasco in Lebanon involving a custody dispute and a now jailed 60 Minutes film crew on “white privilege.”

I admit it was something that should not have been done by the 60 Minutes team, no matter the good intentions. Their job is to report, not to interfere.

I feel for the mother.

The high and mighty who wrote this article mentions that if the father did the same in Australia we would be outraged. The difference is Australia won’t blow up in war at any moment where as Lebanon is surrounded by conflict.

Yes the photos (of Hamra Street) may give the appearance that Beirut looks like any other safe Western city, however when it’s surrounded by Syria, and it shares its southern border with Israel, how long will peace last in that area?

So for the safety of a child, (also, a child who won’t be encouraged to wear a bomb vest,) I side with the mother in her attempt to bring her child back to Australia.

Let’s take a brief look at a few lines from the article:

“What made these journalists think they could do this, and get away with it? The answer must be tied to the disdain Australians by and large hold for non-Western countries.”

Obviously. There could not possibly be any other explanation.. Never mind that Australians are in the top 10 nationalities most likely to travel. Disdain. That is all we feel.

Hamad shows a photo comparing the fictional Hamra Street depicted in the US drama Homeland, and the thriving, vibrant reality. Never mind that modern Western spy-thriller TV series and movies regularly portray the big bad guy, the head terrorist, as a white male. The subtext of Skyfall was that the ultimate enemy to the West is ourselves, an enemy which we created, and we deserve. But Hamad found a remnant of old-world-colonialist chauvinism. Must be more of that disdain we feel.

“It’s no coincidence that this took place in a region that the West has long treated as little more than its playground; carving up land in the Sykes-Picot agreement, launching countless wars, orchestrating coups, arming dictators, and so on.”

When have the political realities of the Middle East ever reflected the ethnic or national make-up of its people? Before the British and the French took control of much of the Middle East after World War One, Lebanon was ruled by the… Ottoman Empire. Not to mention the Umayyads, the Abbasids, etc., or the fact that these empires regularly smashed and slaughtered their way into Europe, Africa and Asia. Is Hamad saying she is perfectly happy with imperialism, as long as it is Arab imperialism? Furthermore, the Russian backed Baathist Syrian regime treated Lebanon as its puppet for decades, funding the Hezbollah terrorists inside Lebanon, and killing Lebanon’s former president, Rafic Hariri, when he stood up to Lebanon’s Syrian overlords. What does Hamad have to say about Syrian “meddling”?

“In common Australian parlance Lebanon is thought of as a ‘third-world sh!thole’ (I should know, I’ve been told to go back there often enough), even though it is not a developing country. It is assumed to be an Islamic nation, even though almost 50 per cent of the population is Christian and the president is always a Maronite Catholic.”

Hamad conveniently leaves out the fact that Lebanon used to be majority Christian, not just “almost 50 percent.” When muslim refugees from Palestine were brought in, the muslim population quickly outgrew the Christian population. Lebanon became majority muslim, and with it came the civil war which turned Lebanon into the “third-world sh!thole.”

As shown in a video The XYZ shared yesterday, Hamad uses “because reasons” logic. For example, we don’t call the bungled rescue operation a kidnapping. Because white privilege. Australians assume you can “waltz” in and out of a country. Because white privilege. The West “meddles” in the Middle East. (Let’s ignore the Saudi dominated OPEC cartel’s decades long manipulation of the world oil price to suit its own agenda; the funding of extremist Wahabist ideology throughout the West with Saudi petro-dollars; and the Arab world’s millennium-long history of imperialism and brutalisation against Europe.) Because white privilege.

Hamad consistently uses the term “white privilege” as though it is a given, without any need to define it or prove it exists. Aside from being logically flawed, this is the height of prejudice.