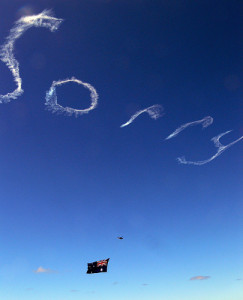 Saudi Arabia, in its role as head of the UN Human Rights Council, has announced the inaugural World Sorry Day. The idea of such an event is for countries to apologise for acts of aggression, invasion, genocide, and cultural appropriation in their past, no matter how distant.

The Saudis have taken the first step, in announcing they will make a formal apology to the world for launching 1400 years of invasion, slavery, and cultural genocide throughout the Middle East, Africa, Europe and Asia.

This has come as quite a shock to the Australian Greens – a spokesperson stated that:

‘This is never what we intended when we promoted the idea of making people feel guilty for things their forebears did. We only meant for such a theory to be applied to white people, so as to eradicate them from the Earth. This step could potentially open a Pandora’s Box of guilt equality, to which we are utterly opposed.’

Such Green fears do not seem unfounded, with the Greek Orthodox Church being the first to open old wounds, laying claim to the Hagia Sophia in Istanbul. Not long after, both the Italian and Greek governments laid claim to all of Turkey, much of the Middle East, the whole of North Africa, Spain, France and England, although negotiations are underway to share the Eastern and Western portions between the two nations.

Meanwhile, the cultural appropriation blame game appears to have lurched into full “swing”. India has demanded its numbering system back, and demanded that Arabs stop claiming credit for it, while the Chinese government has demanded the sole right to the use of gunpowder. Black musicians in the US have launched a class action against white America for stealing rock’n’roll, but a counter suit has been launched by white classical musicians demanding back their entire harmonic system from jazz.

Where will it end? Nobody knows. Perhaps you have more suggestions of your own.