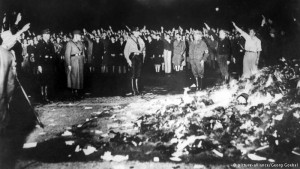 Our society has developed a deeply rooted and distinctly unhealthy, even dangerous, problem. It’s not racism, or sexism, or homophobia, or any of the other phobias you’ve been warned about. It’s the instinct to ban, to outlaw, and to shut down. This instinct manifests itself in all manner of ways – the incessant calls for someone’s visa to be revoked because their views are too offensive to hear; the new nanny state prohibitionists in Sydney refusing you a drink after a certain time of night; the campus crusaders who want to outlaw, ban and shut down anything they deem too offensive for the delicate petals who populate undergraduate classes today to hear…. The list could go on and on and on…

Whilst allusions at Nazi Germany are somewhat de rigour in political debates today and frowned upon, this is one matter in which the parallel holds perfectly true, in an ominous way. The infamous Nazi book burnings were not an invention of the Minister for Propaganda, the notorious Josef Goebbels, nor were they a decree from der Fuhrer. The book burnings were a “grass roots” movement generated by University students eager to demonstrate their loyalty to the Third Reich in a visible way. What better way than to make a very public show of their allegiance to Nationalist Socialism by consigning every dissenting and offensive view to the bonfire?

It’s not a very long step at all from calls to refuse Dutch politician Geert Wilders a visa to enter Australia, or calls in Britain to refuse Donald Trump entry into that country, or demands Stephen Fry never host the BAFTA awards again, or that the statue of Cecil Rhodes at Oxford be torn down, or that Germaine Greer, Peter Tatchell (and insert here whoever you never want to hear from again) be banned from our screens and radio stations… to the frenzied crowds giving the Nazi salute and shouting out their allegiance to the Reich and its Fuhrer as they tossed the offence giving books into the flames.

Already consumed by the flames of political correctness in some places are countless literary works, from American classics like Huckleberry Finn, to English children who must be protected from the insidious evil of Enid Blyton, to, perversely, even Dante’s Divine Comedy, and the list could go on and on and on….

When a whole society, typified by its public intellectuals and the undergraduates they are forming, takes as its starting position the notion that it is better to ban and silence the dissenting and offending view, rather than to engage with it and seek to defeat it in the contest of ideas, then the totalitarian instinct is already deeply embedded, and a metaphorical book burning is already underway.

The logical next step is the Gulag. See you there comrade… I’ll be the one clutching my tattered copy of Mark Steyn’s latest tome as we shuffle forward for the next class in the re-education process, hoping sincerely it will not be compulsory gender re-assignment.