The main take-home messages from the lecture included the assertion that free trade and climate change are racist. I kid you not. 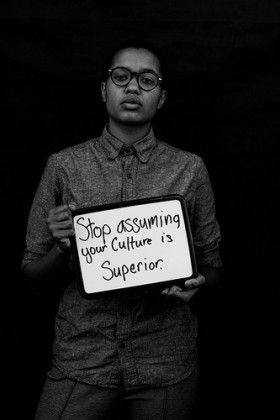 According to a report in the the Cornell Review, Tometti argued that climate change was “global anti-blackness” because six of the ten countries on the top of the climate change vulnerability index are African.

Tometti also stated that free-trade agreements between European and African countries were racist, because they allow African nations to build their economies as well as to free them from their colonial past. Oops, sorry it looks like I got that around the wrong way. Free trade isn’t racist… I mean, free trade is racist, according to Tometti, because it apparently damages African economies and reinforces colonialism…. Really?

Not to be outdone, Alicia Garza expressed her wish to “retire” the phrase “black-on-black” violence, preferring to focus instead on the violence of the state, claiming that “not all violence is equal.”

Garza’s words will no doubt bring comfort to victims of violence around the globe – especially black victims of violence who are unlucky enough to assaulted by other blacks. That violence is simply not the same as violence committed by white people, kind of like the way domestic violence used to not be regarded like other forms of violence, and was swept under the carpet.

In conclusion, isn’t it wonderful to see that one of the world’s leading academic institutions is maintaining such high standards of intellectual rigor? What’s more, that those who purport to follow in the hallowed footsteps to Dr Martin Luther King Jr hold fast to his vision of a “colour-blind” world, and dream:

“…that my four little children will one day live in a nation where they will not be judged by the color of their skin, but by the content of their character.”