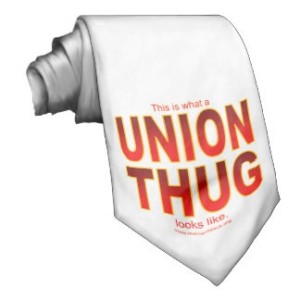 So the Royal Commission into the trade union movement in Australia has handed down its findings and, lo and behold, found widespread evidence of potentially criminal behaviour and corruption in the Australian union movement, in particular among the CFMEU, which is described as lawless. Who would have guessed it? From the Painters and Dockers union, banned as a criminal organisation years ago, to the BLF, deregistered by a Labour government in the 1980’s, to Craig Thompson’s credit card, to the CFMEU thugs harassing and abusing people going about their daily business on picket lines and protests all over the country, the Royal Commission is telling us the bleeding obvious.

Australian workers have already, long ago, voted with their feet, by walking away in huge numbers from the union movement, to the extent that barely 10% of all employees in the private sector are union members (the numbers are higher in the sheltered workshops that are the public sector workforce). On the whole though, Australians, by a very large majority, don’t want anything to do with unions and don’t want them in our lives. We’re still far more likely to go to Mass on Sunday than turn up at a union barbecue.

This is, however, not true of one organisation, and one only – the Australian Labor Party. It being led by a man who has known nothing of the real world and the real workforce beyond the union movement. Its industrial affairs spokesman being the brother of the aforementioned CFMEU, and so, well placed to run the union’s lines in the media and do its bidding in the parliament in return for the millions the CFMEU pumps in to Labor party coffers.

Reading through the litany of potential charges and court actions, criminal and civil, identified by the Royal Commission in relation to a host of union figures, one can see why the Labor Party clung to Craig Thompson for so long, even when it was clear he had squandered the union fees of some of the lowest paid workers in the nation on prostitutes and dinner parties – Craig probably didn’t stand out at all among his fellow union officials; just another self entitled friend of the worker getting his own back against the Capitalist pigs who had denied him prostitutes and five star restaurants for too long.

At least one Labor Party member, former Prime Minister Bob Hawke, has the intelligence and political nous to know, and to say publicly, that the party should, at the very least, ditch the rogue CFMEU, and seek favour with the voters, rather than with unionists who think they are still in the glory days of 1950’s picket lines, demarcation disputes, and ambit claims. Good call Bob. We’re still waiting for the response from lifelong union hack “Disco Bill” Shorten, but wouldn’t be putting any of our hard earned on him taking the former PM’s counsel on this. The Labor party long ago became, and continues to be, the party of the unionist, not the worker. The Australian people know the difference, and we trust, will vote accordingly.