So the elites in the media, the comrades, the academics, social engineers, and even the bloody Australian of the Year say it’s time we became a Republic. Most of them say we should change the national flag too. Six of the seven State and Territory leaders say we should be a Republic. ‘Bandanna Boy’ Peter FitzSimons says it. Everyone on the ABC says it. Pretty compelling hey?

A 2014 poll showed that support for an Australian Republic was at an all time low of just under 40%, with more of those aged 18-35 opposed than those aged 65 and over. No wonder the Republicans have switched their campaign strategy to agitating for a plebiscite – they would never win a referendum, not even second time around. Furthermore, most Australians don’t think the issue is one of any great importance. Certainly not the same level of importance it has on the ABC, or in the pages of the Guardian or the Fairfax newspapers.

The elites tell us that our history is something to be ashamed of, and like to emphasise as much as possible our social problems and difficulties together with the very worst aspects of our history, especially on Australia Day, which they like to rename ‘Survival Day’ or ‘Invasion Day.’ Is that how the majority of us think about ourselves and our national day? Not according to a recent poll published by the IPA. It found:

And then there is the flag, We’re told time and time again, every Australia Day, that our flag is not the one our soldiers fought and died under, an old myth easily disproved. We’re told the majority of us would like the Union Jack removed from the corner or the whole thing replaced with some baby sick deep yellow on a green background with some stars thrown in a corner. Is that true? A channel seven Sunrise poll, that mysteriously disappeared from the TV station’s website very quickly (luckily I got a screen shot) had 15,000 responses in hours, with over 85% consistently saying NO to the question ‘Is it time to change our flag?’ 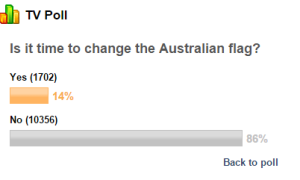 Is it time to junk the monarchy and become a Republic? Is it time to change the flag? Are we ashamed of our history and too embarrassed to celebrate on our national day? The elites say yes. The vast majority of us say ‘no way cobber, get yer hand off it.’