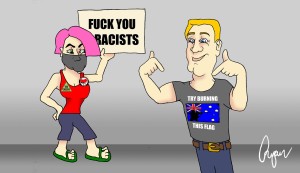 Readers of the once august, but now just plain sad, embittered and delusional publication that is the Sydney Morning Herald will have been genuinely shocked and saddened to read this painful blog post by Alecia Simmonds, a white woman with red hair and freckles, who donned a hijab and went looking for racists and “Islamophobes” on Sydney’s north shore.

Accompanied by two genuine Muslims, including the wife of well known activist Keysar Trad all Alecia and her two acolytes found and encountered was warmth and courtesy. How distressing for them. Even this, however, must be twisted into an example of latent racism, such is the twisted world inhabited by Alecia, her acolytes, and the readers of the SMH. In the absence of real and actual racism, examples harvested from the memory of Alecia’s acolytes must instead be offered as the trio wander the abuse free streets and are affronted by the friendliness and kindness of strangers and shopkeepers. All such examples are offered uncritically as undisputed and painful incidences of racism and “Islamophobia” because Alecia says they are – there is no attempt to verify or substantiate them, or do anything that might resemble genuine investigative journalism. This does not surprise – the SMH became an activist publication, rather than a serious newspaper, some time ago.

The post is, essentially, a lament. Not that Alecia encountered racists under the hijab, because she didn’t; and not that the north shore was teeming with white supremacists, because it wasn’t; but because Alecia is sure her fellow (white) Australian citizens really are vicious “Islamophobes” – she just couldn’t find any on this trip. But you can be sure that she, and the SMH, and Keysar Trad’s wife, will go on looking – there’s sure to be a (white Anglo Saxon) racist out there on on Sydney’s north shore somewhere. Or perhaps one could just write in and publicly come out as an “Islamophobe”, whatever that means (whatever Alecia says it means we suspect), and save everyone the trouble. 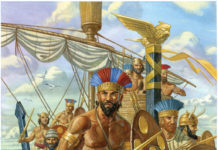