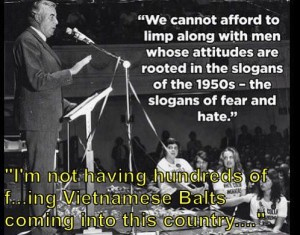 Reports have flooded in today of the wailing, sackcloth and ashes which has occurred over at their ABC given that it is, after all, 40 years to the day since the worst Prime Minister in Australia’s history, Gough Whitlam, was dispatched.

As Ryan Fletcher pointed out:

“Waking up this morning, to what I thought was a day of remembrance for fallen armed servicemen who had died in the line of duty for this country… Instead, from what I could ascertain from ABC Breakfast, today is about remembering the sacking of that pinko Prime Minister Gough Whitlam.”

A particularly astute follower of The XYZ, (who has asked to remain anonymous, lest they suffer a social justice death,) made the folowing elaboration, earning Quote of the Day in the process:

“Remembrance Day hijacked by the left. The sacking of Whitlam, due to his own dramatic performance following his dismissal, has become some sort of Leftist Injustice Day, (‘Oh.. The humanity’) still promoted by the left and their adoring media to remind us how evil our Constitution is.

“LID. Time to put a lid on it indeed. Nice caricature Ryan. Those bloody t-shirts.”

The XYZ would like to suggest to the left in this country that it move on from the second stage of grief.

It’s their ABC, it’s your XYZ.