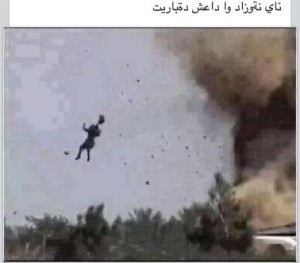 According to reports coming out of the US, the world is a much better place today as the notorious ISIS killer dubbed “Jihadi John” is right now wandering about somewhere in the afterworld crying out for Allah and receiving (we suspect) no reply.

Jihadi John is the Kuwaiti born man, real name Mohammed Emwazi (spot the link to Islam yet?), whose claim to fame was having himself filmed hacking the heads off journalists. In an especially satisfying turn of events, Jihadi John was not just taken out, nuetralised, or merely killed – he was “evaporated” in the process of getting into a car, and left this world in many pieces, leaving little physical trace of his former bodily existence.

Bravo! Raise a glass when you get a chance and drink a toast to the demise by Drone of this notorious head hacker.

Source: ‘ISIS fanatic Jihadi John killed by a US drone strike’ in Raqqa