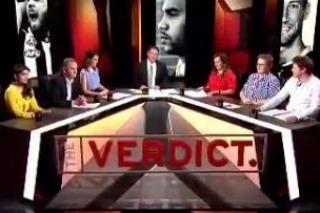 Channel Nine’s new Q&A style show The Verdict has premiered, and, whilst the jury will be out for a few weeks yet, early indications are that the verdict will be favourable.

Before the show had even debuted, and before its smug media reporter had even seen it, The Sneering Morning Herald was already mistaking the Twitter feed as public opinion, and claiming the public were delighting in mocking the panel line up and, of course, would not be watching. The few lines that resembled an actual article contributed by this journalist were then followed by the inane and narcissistic Twitter posts of what appeared to be an assorted sample of Green Left Weekly subscribers. This, a further example of what constitutes “news” and “journalism” at what was once an actual publishing house called Fairfax.

In fact the panel on The Verdict was, in the most part, quite interesting, at times passionate, occasionally annoying, and always engaging. Host Karl Stefanovic’s affable personality did not lend itself as well in this format as it does on morning television, and there were times when he was close to losing control of the strong characters (especially Mark Latham), but generally he did a good job and will, no doubt, improve. On the whole, The Verdict was better than expected.

Most of all, however, The Verdict actually showed that achieving a relatively balanced conversation among a genuinely diverse mix of panelists holding forth on hot topics in the community like Islamic terror, mental illness, and freedom of speech, is actually quite easy. Unlike the so-called national broadcaster’s longrunning ‪#‎qanda‬, the panelists and the views expressed on The Verdict resembled the exchange of opinions that take place in factory lunch rooms, in front bars, and over neighbourhood fences, all across the nation, without the obvious bias to the inner city hipster so tiresomely apparent on Q&A.

Mock it if you will. But as one panelist opined on The Verdict in its debut effort, treating the viewers and the readers like idiots, and talking down at them, never constituted good politics, and was never much of a recipe for generating ratings either. Of course, the ABC need not concern itself with trifles like ratings and revenue. The Verdict does. And that will, it can only be hoped, keep it grounded, interesting, and mainstream.