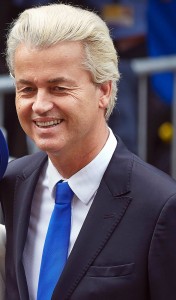 As everyone knows, The Guardian is a very serious newspaper, very serious indeed. Previously its wisdom and insights were available only to the English, but through the wonders of modern technology, the Guardian now has a ‘Guardian Australia’ website, on which local news from the colony is placed a few mouse clicks above news from the mother country as one scrolls down the page.

In the delightfully avant garde world of The Guardian (Australia – aka. the colonies), the Dutch MP Geert Wilders, being a foreigner and not a Muslim, can be treated with typically British disdain. So he appears described as, not a politician, but a “far right politician.”

It is in this context we come to the Guardian’s delightfully nuanced reporting on the new Geert Wilders endorsed Australia Liberty Alliance Party, and its candidate, Ms Kiralee Smith. Making her maiden speech before the cameras at the launch of the above named party, albeit in the shadows of Mr Wilder’s formidable hair, spake Ms Smith, as reported in the Guardian:

“Raising her voice to speak over the chant of ‘Tacists [sic] are not welcome here’, Smith said she would run on a platform of freedom of speech and freedom of religion. Provided that religion was not Islam which, she said, ‘is divisive in this country and is being imposed’.

In its bid to ridicule the aforementioned Ms Smith, the Guardian manages only to ridicule itself, unless of course the ‘protesters’ (read ‘welfare recipients’ and / or students) who numbered about ten Socialist alternative hacks according to other reports, actually had invented a new word for this occasion in ‘Tacist’ or were so pissed they couldn’t pronounce the ‘r’.

Either way, it was startling journalism from the Guardian, and we could not agree more with the smug smart-arse who penned the piece – that those Tacist bastards should be shown the door from Terra Australis real quick. Good one comrade!

Source: Geert Wilders tells Australia to abandon multiculturalism or end up like the EU