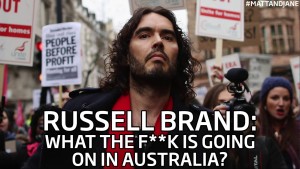 The term ‘prophet’ was once reserved for real and genuine change agents, who gave voice to some major injustice, and made the powers that be take notice. Larger than life figures, who inspired whole generations, such as Martin Luther King, or Archbishop Desmond Tutu, might attract the title prophet, whilst religious leaders, such as Jesus and Mohammed, were often bestowed with it by their followers.

But one man’s prophet is another’s minor celebrity, or, over at the Guardian, one’s rather unfunny comedian and occasional actor. Never quite the go to place for serious political opinion on account of its penchant for undergraduate name calling and smearing, the Guardian was not until now an unintentional source of political comedy. Until today, that is, and the marvelously juvenile column in which the hijab wearing columnist Van Badham claimed prophetic status for one Russel Brand.

Even the sub editor couldn’t quite go with it, and downgraded Russell to an ‘agent of change’ in the headline. Nonetheless, ‘prophet Brand’ survives, apparently straight faced, in Van’s opinionated prose. Reading this Van piece is a bit like watching one of those serious movies, such as Grease 2 or the appalling American remake of The Wicker Man – they’re not meant to be funny, but they are so laughably bad as to be, well, funny. Funnier than Russel Brand at any rate.