When the Soviet Union captured Eastern Germany from the Naional Socialists, and continued to occupy it and turned it into a vassal state, they didn’t call it the German Socialist Republic, they labelled it the German Democratic Republic.  Similarly, Soviet occupied Poland became the People’s Republic of Poland.  (At least the Union of Soviet Socialist Republics had at least some honesty attached to its name.)  Sometimes, Communist regimes liked to combine the two euphemisms into “People’s Republics,” to hide the fact that they were or still are Communist totalitarian dictatorships, in much the same way that our weak political leadership has combined two adjectives to create the euphemism “violent extremism,” in order to hide the Islamic and terrorist nature of Islamic terrorism. 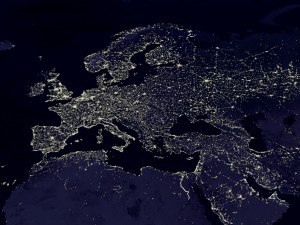 The left currently dominates the discourse on the Middle East Migrant Crisis.  They have been able to label the Middle East Migrant Crisis the European Migrant Crisis.  They have been able to attach the label of “refugee” to people who refuse refuge in multiple safe countries but want to go to Germany.  They are very quickly applying the label of ‘white supremacist’ to anyone who dares to identify themselves as European, or of a European nationality, based on their ethnicity, rather than their location.  They are experts at changing the meaning of something in order to achieve their political ends.

And those at the forefront of the Islamic political movement are nothing if not masters of this leftist tactic of controlling the discourse.  They encourage more “dialogue” whenever an Islamic terrorist attack occurs, speak of “extremisms” in explaining why Islamic terrorist attacks occur, and promote “tolerance” in resolving the issue.

Likewise, when an Islamic political party comes to power in Europe, and indeed it will, it may not even explicitly identify as Islamic in nature.  It will not make radical changes overnight, but assure everybody that nothing has changed.  Incremental tightening of the screws will be accompanied by occassional violent outbursts, whether they are of the Krystalnacht or Night of the Long Knives variety, followed by long lectures on the importance of tolerance and diversity.

The Bogan will become the new Jew.

My advice to Europeans?  You have two options: fight tooth and nail for your cultural and political rights, or get out while you still can.