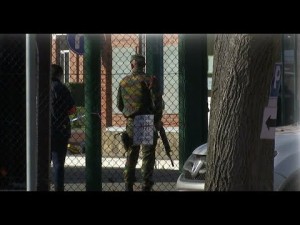 Yesterday, a man wearing a balaclava tried to ram his way into a Belgian army base. Information on the incident remains sketchy. What is incredible is the language used by the Belgian officials reporting the attack. As usual, the old euphemism is employed:

“The theory of an isolated incident or one of a psychologically unstable person cannot be ruled out.”

But it is this comment by a Belgian official which is the most revealing:

“An official described the attack on a barracks as “incomprehensible” because “there are plenty of weapons there to strike back”.”

Let’s think about this for a moment. The official is making the argument that because the attacker clearly had no chance of success, because he would have been facing such overwhelming firepower, it is unlikely that it was terrorism.

Because Islamic terrorists who believe they will go to heaven and receive great reward if they die fighting for Islam, have never launched suicidal missions against overwhelming firepower in the past…

For an approach to terrorism rooted so deeply in the idea that we should try to understand how “the other” views the world, this would appear a wilfull, and overly convenient Eurocentric approach. Why is it only in this case that we judge another by our own standard?

If you want to understand dhimmitude – the cowardice produced by a dark memory of fear and terror caused by over a millennium of relentless Islamic invasion – this is what it looks like.