The current EU crisis is akin to opening the Gates of Vienna. When in 1529, and again in 1683, a great Islamic surge to Europe took place, Vienna stood firm in the face of a potential onslaught from the relentless Ottoman empire. 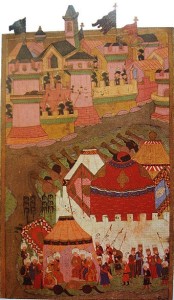 This had profound effects on the subsequent course of history, ironically re-enforcing the foundations for the Enlightenment in Europe. The great leaps forward that subsequently took place, in Europe but not the Islamic world, paved the way for Rationalism, for the waning influence of the Church, and for many of the beloved liberties and personal freedoms we continue to enjoy to this day.

The push for liberty led to the early union movements, which rightly corrected imbalances between workers and capital. Slavery was abolished on both sides of the Atlantic as the Enlightenment spilled over into the American Constitution. Womens rights were strengthened, as were the rights of minorities.

What we have seen in recent decades in the West is an industry of self loathing, as we eulogise victims and self sabotage the industrious. This industry lauds multiculturalism, embraces Islam, denies sovereign rule and places the wants of migrants as the ultimate human right.

These trends have culminated in the removal of the Gates of Vienna, encapsulated in the total lack of border controls so that people can move uncontrolled from diverse lands toward the most generous welfare states of Europe. It is akin to the siren song from Greek mythology that lured men to their deaths. We now have millions of migrants en route to the heart of Europe.

They dream of, and will demand, welfare, education, health care, jobs, housing and so much more of the things that Europe struggles to provide to its own. They carry forth the Ottoman’s creed, the creed which has served the Middle East so poorly since this previous adjunct in history. The Gates of Vienna once nurtured the Enlightenment. Today’s open Gates of Vienna are a mistake, the magnitude of which only the future can tell.