Tony Abbott was recently un-democratically deposed as the leader of the Australian Government and Liberal Party, in a media and polling inspired coup d’etat. His Prime Ministership was undermined by a toxic media, with the ABC being relentless in its character assassination. Pointedly, his first Federal Budget was poorly received, whereas in fact it sought to address the massive structural budget deficit that Australia has, primarily as a result of spiraling welfare and costs associated with big-government. Abbott’s second budget was a crowd pleaser, as it pointedly declined to address the real issues that the nation faces as a result of the emerging fiscal crisis.

This trend continued in his public speeches, in which Abbott, like almost all politicians, is unable to speak plainly. Similar to a reforming budget, it is clearly required, however the media, led by the shamefully biased ABC, create a furious controversy over anything which they deem un-PC.

And therein is the problem. The media do not represent the average or median view – they represent a fringe of the population but proclaim to be the voice of the people. The media workers are institutionally biased, akin to the trade union movement.

As a result, this bias, combined with social media lefty mobs, undermines the ability of our politicians to govern. They literally have to appeal to the media and social media mob defined lowest common denominator. As such, it’s probable that we will see poll driven political coups become the norm. It is likely that fiscally responsible budgets will be a thing of the past. It is likely that big government will grow bigger, that personal liberties will be eroded, and media bias will grow more villainous.

Tony Abbott was a sniper in opposition, and a standout target in government. His gaffs were inadvertently comical, culminating in the very un-PC moment where less than a week ago he and a colleague joked dismissively of climate change.

The media mob and twitterati must have wet themselves with anticipation.

Let it be clear, in no uncertain terms, we have entered a dangerous era where the media and the twitterati mob have killed Freedom of Speech. They have made it almost impossible to govern effectively, responsibly and for the long term. Deferred gratification is beyond their grasp. Any leader that cannot, in a single headline, summarise the need for pain now for greater gain in the future, cannot deliver the future gain.

Fear the mainstream media. As for Abbott, don’t hate the player, hate the game. 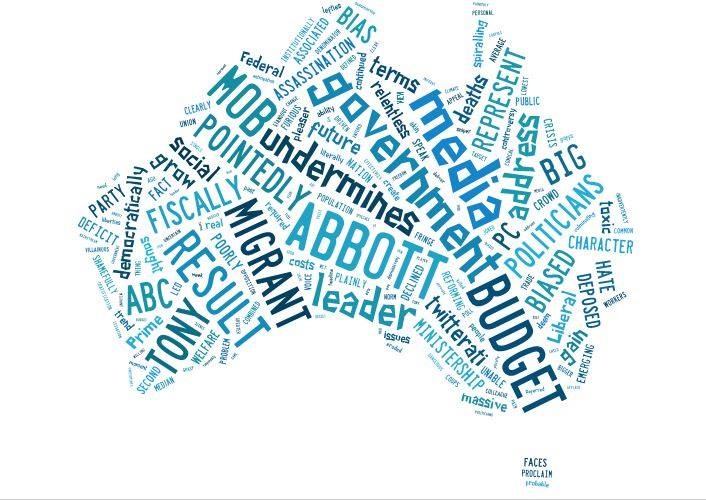