Poor Croatia, they were the good guys gushing with humanitarianism for 24 hours. Until the tidal wave of reality swamped them. Hungary will come out looking visionary. It was the Gates of Vienna in 1683 that stopped the last Muslim surge into Europe. Could it be the ‘Fence of Hungary’ that is the catalyst for it now? 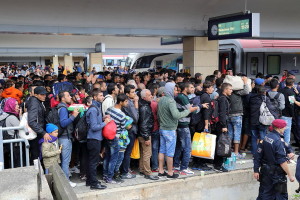 On Thursday, Croatian Interior Minister Ranko Ostojic said his country was “absolutely full”. He said his message to the migrants was: “Don’t come here any more. Stay in refugee centres in Serbia and Macedonia and Greece. This is not the road to Europe. Buses can’t take you there. It’s a lie.”