Elon Musk is the greatest human being alive, and will transform the face of the planet within our lifetimes. The South African made a fortune as the head of Paypal, and invested his dividend into founding or backing companies which have developed groundbreaking new technologies in three key areas -the electric car, clean energy, and space travel.

His electric car company, Tesla Motors, has blown the staid, boring image of the electric car out of the water. It is producing cars with serious grunt, cars which outperform the best supercars in the world for a tenth of the cost.

The long term aim of Elon Musk and Tesla Motors, (and one would be wise to put money on this,) is to mass produce viable, awesome and affordable electric cars which ordinary people want to buy and want to drive.

Along with developing the infrastructure necessary to support a viable electric car industry, Musk was instrumental in the founding of SolarCity, the second largest producer of solar power systems in the US, and is busy coordinating technology from Tesla into SolarCity.

Musk’s crowning jewel is SpaceX. Having designed and built its own rockets and spacecraft from the ground up, SpaceX is contracted by the US government to service the International Space Station with supplies, and eventually with astronauts. Despite setbacks such as the odd explosion, it is doing this better and more efficiently than NASA.

Most important of all, SpaceX is working on developing reusable rockets. By far the most expensive aspect of escaping earth’s gravity is that currently, a rocket can only be used once. Tremendous quantities of fuel are expended, but this pales into comparison with the fact that you have to build a new ship every time you travel into space. To solve this, SpaceX is developing a rocket which can take a ship into outer space, and then come back down to earth. At the moment, the only obstacle they face is landing it, and they are not far off resolving this.

This is groundbreaking, because it holds the potential to reduce the cost of space travel dramatically. Along with other private companies, they could open up space travel to ordinary people the world over, slash intercontinental travel time, and provide the impetus for humans to colonise the Solar System.

Musk is a fierce advocate of the free market, and voices his admiration for Margaret Thatcher. But he demonstrates a sense of proportion, in his relaxed attitude to his own patents, and his willingness to share his technology with other companies to spur competition, even if it means competition against his interests, because he understands that this will lead to faster advancement.

Musk understands that the free market provides the best environment for geniuses such as himself to fully realise their potential, and to provide the greatest possible benefit to humanity at large, by removing as many obstacles as possible from their path. It is ironic that far left extreme environmentalists, who are relentless in their advocacy of government programs, government intervention, and placing costs on private enterprise in order to reduce the amount of energy they and their customers use, are in fact the greatest obstacle to their own stated goal of a clean and healthy planet.

This leads to another way in which his desire to ensure the continuation of human consciousness differs in emphasis, and ultimately practicality from the misanthropic left. Rather than lecture us on how the earth is the only home we have, and how we must therefore lower our civilisational sights and our standard of living, (and barely disguise fantasies about extinguishing the human race so that Mother Gaia can live on,) Musk recognises the frailty of human existence if we continue to live on one small rock hurtling through the vastness of space. Hence, his eagerness to make human life multi-planetary. Although I differ from him on the extent of the threat of global warming, I have to admire his practical and philosophical approach to the issue, which is based on the belief that human ingenuity and human freedom can find the solution to any problem.

Likewise, I admire his clarity of thought when it comes to American Exceptionalism. America was founded on the concept of natural law, that rights are endowed simply by our existence, rights which government has no right to take away, as opposed to being bestowed upon us by government. I do not begrudge the fact that he is almost “nauseatingly pro-American.” He is right to describe America as “the greatest force for good of any country that’s ever been,” and is spot on when he states that without America there would be no democracy today, as it saved the world in World War 1, World War 2 and the Cold War. Personally, if there is one other country on earth I would chose to live in, by my own free will, other than my native Australia, it is the United States. 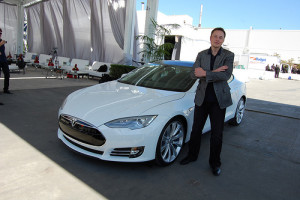 I love the fact that one of his spaceship designs, the Falcon, is a tribute to the Millennium Falcon from Star Wars. The generation that grew up on Star Wars which, when they were kids, fully expected to be travelling to outer space by the time that they were adults, are being inspired by it, now that they realise that the only way we are going to get there is if we stop waiting around for NASA, ie, the government, and do it ourselves. Furthermore, the spirit of America is encapsulated in these movies, (or at least the originals,) and is an enduring symbol of everything that is good about America – freedom, liberty, enterprise – in a time when these ideals are under attack from powerful forces within.

My only caution to Musk would be to keep his distance from the political process. He has donated a few million over the years to both the Democrats and to the Republicans, rationalising with the line that “in order to have your voice be heard in Washington, you have to make some little contribution.” I have no problem with SpaceX earning a government contract to service the ISS both with supplies and people, as this saves money, but I would be wary of government subsidies, and realistic about how much real sway one has over those one has lobbied.

The recurring literary image which comes to mind is that of Hank Reardon, from Ayn Rand’s Atlas Shrugged. A genius, workaholic inventor and businessman whose creations bring himself a fortune and the rest of the world wealth and comfort, he remains a little naive about the utility of having “a man in Washington,” until he comes to the twin realisation: his man in Washington will ultimately look out for his own interests, not those of his benefactor; and that he doesn’t need the government – the government needs him.

I hope Elon Musk can extricate himself from a government and political system in America which is becoming increasingly eager to intervene in every aspect of the economy and people’s lives, and chart his own course. All of humanity will benefit from Elon Musk, not because he is a leader, and certainly not because he tells people what to do – he doesn’t – but simply because of what he does, what he has created, and what he will create in the future. Elon Musk should be free to let his mind and his ambition be the only arbiter of what he does, in a a world which places no barriers in his path.