A planned rally marking the 10th anniversary of the Cronulla riots is being blocked by New South Wales Police which has sought an injunction in the NSW’s Supreme Court. Organisers of the rally say that they will continue to mark the anniversary despite the court action. 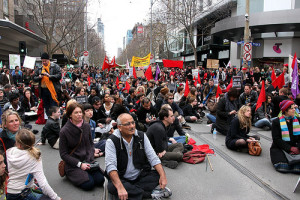 Disagreeing or being offended by someone’s opinion is not a sufficient reason in a liberal democracy to silence the public expression of opinion. Accusations of ‘hate speech’ and the like are slanderous terms vacant of meaning which add nothing to our discussion on important social issues and simply seek to silence dissenting views. Those who use these disingenuous slurs on their opponents could also find the same tactic used against them should the political wind change.

I am appalled by the views articulated by Hizb ut-Tahrir, an Islamic group which freely meets and protests in Australia, expressing their contempt for Australian culture, the West and democracy. Hizb ut-Tahrir’s mission is to introduce Sharia law and Islamic rule in Australia, yet they are free to express their opinions.

Likewise, I disagree with Green-Left protests and counter-protests which make up the vast majority of public activism, yet I don’t believe they should be silenced.

Various Islamic and Green-Left groups could readily and rightly be accused of espousing hate, yet this is not enough cause for them to be silenced, and such reasoning could be potentially used against any group holding firm opinions.

As a nation we will not benefit if unpopular views, or views we personally detest are suppressed and ruled out of public discussion – and banning these discussions relegates them to darkness where they are likely to grow and fester, unseen. Instead if we disagree with the ideas being expressed by ‘Reclaim Australia’, ‘Hizb ut-Tahrir’, or the ‘Socialist Alliance’, we need to expose bad ideas to light and scrutiny, and add our own voices to the conversation.