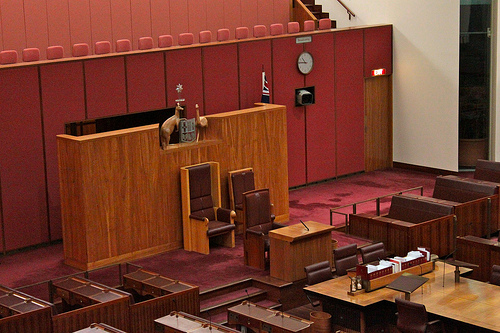 Like most contributors here at XYZ I’m a great fan of Andrew Bolt.

He has been a calm voice of reason in a sea of leftist media chaos since I was a young man.

I remember attending an O-week society day fifteen years ago and seeing pictures of Andrew being used as dartboards by the local Communists. I can think of no greater honour or recommendation.

For many of us, reading his columns helped to introduce us to the basic bones of a conservative worldview. For a long time he was the only way many normal Australians got any alternative to the leftist pap we get served up as news and entertainment.

Without him during the hysterical high watermark of Climate madness just under a decade ago, there would have been no prominent voices at all questioning the charlatans like Tim Flannery, flitting from ABC studio to ABC funded documentary spruiking his prophecies of an imminent doomsday.

We watched as the system railroaded him under the abomination that is 18C. We felt with him as he stood in the wind outside the court that sad day surrounded by grinning leftist journalists shoving microphones in his face, overjoyed that the heretic had been given a slap.

Without the political persecution he suffered and his persistence in campaigning on the issue, the momentum for change on free speech in this country might not exist at all.

For telling the calm and honest truth, for questioning the pieties of the establishment and for exploding the pretty lies that are the grease lubricating the slippery slope towards our nation’s destruction he has become a hate figure, reviled in university lecture halls and newsrooms alike.

He has become the Emmanuel Goldstein the left uses to bond with one another. In dinner parties across the nation his name is a trigger for smug guffaws and self satisfied derision. In Melbourne he runs the risk of being physically attacked every day of his life by the extremists of the far left. His reward for speaking what is true was having to move his family out of fear of death threats.

Bolt has been a hero of sorts for many of us, a daggy uncle who loves opera and tulips and wishes for a simpler time when the certainties of life were less uncertain.

Which is what makes this article so hard to write.

It’s time to face up to a harsh truth. Despite how deservedly beloved Mr. Bolt is for so many of us on the Australian right, he in many ways is the epitome of those conservatives who value politeness, civility and being nice over actually winning. To a certain type of mindset there is an almost unassailable conviction that if you win dirty you haven’t really won at all, that if you compromise your principles to save your nation then that nation isn’t really worth saving.

I remember Bolt having a right-wing patriot on his television program who had recently conducted a controversial protest, and berating the bemused man about how he was just as bad as the left. Furiously and passionately demanding he answer how Bolt was supposed to attack the left for being violent sociopaths when this unlettered boor had the temerity to be impolite himself?

Let’s not forget that Bolt as well almost the entirety of the Australian conservative media never really warmed to Donald Trump. He was too brash, too rude, and too plebeian in his mannerisms. He indulged the proles and broke the rules. While the conservative firmament downunder celebrated the Trump victory as their own, much like their equivalents stateside they conveniently forgot that they had been criticising his every move all the way.

But the rot has really set in regarding Bolt’s coverage of One Nation and Pauline Hanson.

I was personally quite surprised when Andrew began to give fair and even favourable coverage to the upstart populist party last year after their stunning election result. I think as the reality dawned that his friend Tony Abbott was being sidelined to the point of no return by the now dominant left of the Liberal Party, Andrew reached out for a new way to add pressure to Turnbull and the Labor party in light blue.

This favourable coverage began to change when it became clear that Cory Bernardi was finally going to launch his own vanity project after what seemed an eternity of waiting. Bolt suddenly became critical of many of the deficiencies in One Nation that he was once willing to overlook or excuse. Suddenly it was Cory getting the airtime, Cory getting the praise.

This all despite Bernardis’ utter strategic stupidity in not only waiting until One Nation had reached levels of support not seen for two decades wide across the country before setting up his party, but in setting up yet another right wing minor party in a political marketplace that already contains half a dozen.

Just to make it clear, this is an overall trend from most Australian right leaning journalists and is not particular to Bolt. Andrew is just so head and shoulders above the rest in credibility, audience and influence that his tongue bathing of Bernardi [a man who has broken the hearts of many of the populist right with his selfishness] has an outsized impact. Miranda Devine and Tim Blair have also managed a sharp about turn, and the reasoning is clear.

Hanson is a populist; she attracts the downtrodden and forgotten as well as the weird and wonderful and spends most of her time talking to people in the street when not conversing with them online. I don’t think I’ve ever seen a politician with the common touch that she has, a Senator who actually listens to what her voters think and then brings those topics to public attention [even when sometimes she shouldn’t, as with Vaccination].

Cory Bernardi may not be a blue blood patrician but by comparison to Hanson he fits the bill. While Pauline takes pains to appear to care, Cory wants to cut. While Cory talks to Gina Rinehart and finds nothing wrong with fracking, Hanson talks to farmers and finds they disagree. Gina may be right and the farmers may be wrong, but I know who has more votes.

Cory speaks the language of Classical Liberalism and Libertarianism, two ideologies that garner great admiration among conservative journalists like Andrew Bolt but have continually failed to make headway amongst the greater Australian public.

One Nation is taking voters from both Labor and Liberal, Cory is highly unlikely to do the same.

Conservative journalists generally in Australia have mostly fallen out of love with Pauline. She speaks too rough and simply isn’t polished enough. It seems she was just a rebound fling from Tony Abbott until the real prize came along. Bernardi, a man who knows how to lose politely in the same old way conservatives in this country have always done, is much more to their taste.

Andrew Bolt and all the others now singing hosannas will cheer Cory over a cliff, help split the patriotic vote and perhaps even hamstring the birth of a right wing version of the Greens, simply because Hanson is not the sort of person they would feel comfortable inviting to a dinner party.

It’s a shame, but it speaks to their intelligence.

It must take truly brilliant people to be this short sighted.Photo by variationblogr