The media tells us that One Nation is set for disaster in the West this weekend. That’s what the polls tell them, and presumably us. What does the media have to gain if they are correct? A solidifying of the narrative they’ve been peddling. A welcome measure of control over the public consciousness after the failure in their coverage of the last federal election, Brexit, and Trump. What do they have to lose if One Nation gets 10-12.5% (or more) of the primary vote, and 2 or more seats in the upper house? Absolutely nothing. They’ll just default to the position that ‘low-information barbarians’ didn’t behave in the manner that civilised people should.

Wash, rinse, repeat. Why are polls so hopelessly inaccurate, and why does the MSM place so much unfounded faith in them? The answer is simple. Polls indicate what we want or hope will eventuate. Not what we genuinely know will happen or what will actually happen. Not even close. Think of it this way. Anthony Mundine is universally reviled. People quite like Matty Johns. If you polled a hundred fans of The Footy Show about who’d win a boxing match, I’m sure you’d get at least a fair percentage who’d pick Johns. This makes no sense. Mundine has extensive boxing experience. Johns does not, but we want him to win. We want him to win badly.

Now ask all those same people if they’ll put $50 on their pick. All of those who did pick Mundine would do so in a heartbeat and wouldn’t even stop to think ‘what if I lose my money?’. You’d be lucky to find five people who picked Matty Johns in the poll to put their money where their mouth is. Even if they were hopeful of a lucky shot, deep down they know they’d be $50 down. There’s nothing to lose from placing an unwavering belief in a poll. It’s what you hope will happen.

Is there a polling method that tracks what people think will happen as opposed to what they’d like to happen? There certainly is. It’s called punting. Let’s say we’re approaching the NRL quarter finals. Parramatta haven’t won a game all season and have horrible form, and their next game is against Manly who’ve won every single game. If you poll a Parramatta fan, he’ll probably still pick his side to win. But what if you tell him that the Eels are paying $14. Is he likely to gamble his entire week’s pay on what he’d like to eventuate? Even most punters club members will be hesitant to pick their own team to some extent if their form isn’t good, because the incentive of not wanting to lose money outweighs a personal bias toward their team.

Where does this leave us in regard to the weekend? When I checked Sportsbet a month ago, One Nation was paying just a couple of dollars for 7.5% or less of the primary vote. For 12.5% or greater (in brackets) we saw longer odds of $15 and upwards. Presumably Sportstab was basing their odds on media coverage, as most punters wisely wait until the eleventh hour because naturally things change. Those odds closely reflected the media narrative. The confident punter who knows (as opposed to believes) that there is a better than average chance of One Nation getting a 12.5% or greater share of the primary vote could stand to profit nicely. But look at the odds at the time of writing: 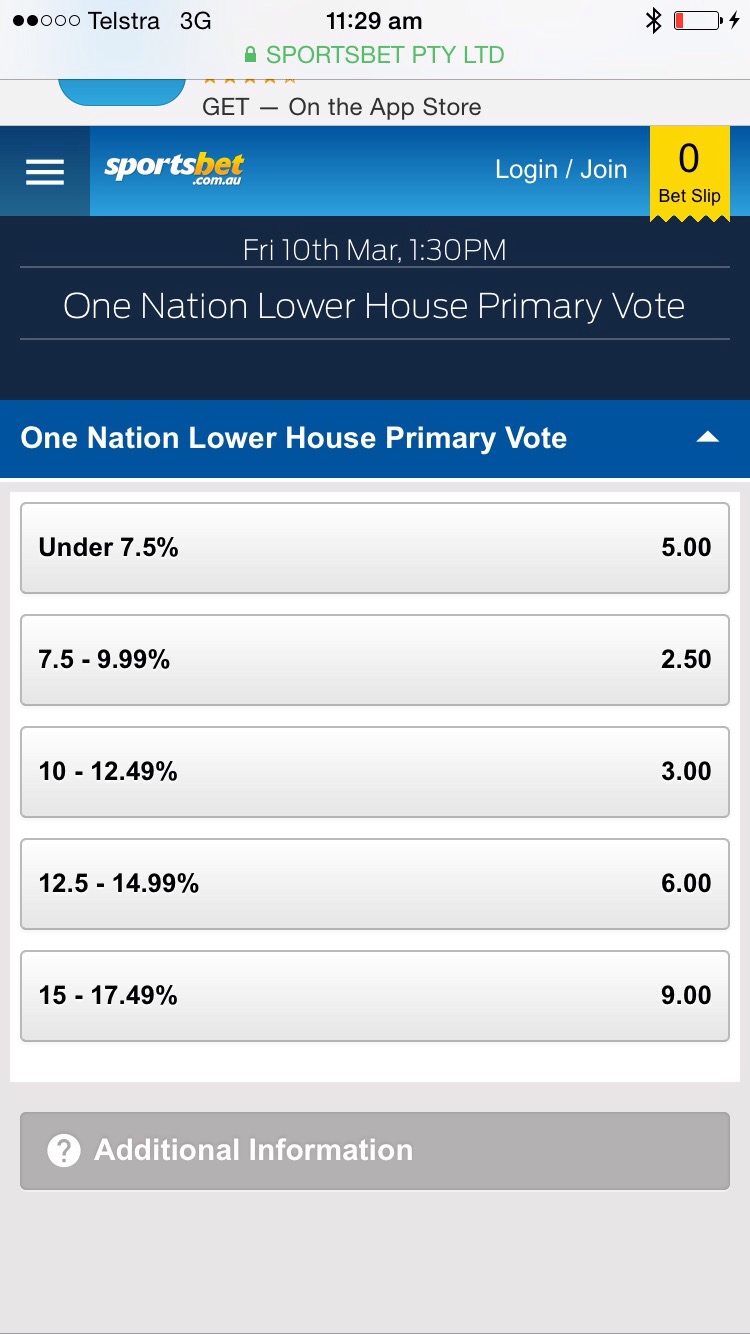 Presumably there has been an enormous amount of money placed on these illusionary longshots (that are far more likely to eventuate than the poll projections) by a large enough focus group who are certain enough of the zeitgeist and the likelihood of something to happen (as opposed to something they’d like to happen) to have physically changed the odds. Not only is a swing to One Nation regarded as far more likely in a practical sense by these punters and Sportsbet as we near Election Day, an unmitigated disaster has been considered such a low risk that Sportsbet have sweetened the deal on that option to encourage MORE punters to go for that option, and LESS punters to bet on a good result for the party.

If media projections were correct, the less than 7.5% option would have the lowest return as almost a certainty. But as we see from the odds, most punters (mainly from W.A you’d imagine) think that the share of the primary vote will look something more like 10-12.5%. And it seems that more of this particular focus group (who are definitely putting their money where their mouth is in every possible sense) believe that it could go as high as 12.5%-17.49% than those who think it will be an unmitigated disaster for the party of Hanson.

The least pragmatic bet in this instance would seem to be backing unmitigated disaster for One Nation in Western Australia. Odds have lessened on the party having some kind of success. And the odds on upper house seats are extremely long for zero seats ($16 at the time of writing), short for between 3 and 6 seats (around the $3 mark), and decent enough for between 7 and 10 seats (between $5 and $7) before getting long again for over 10 seats.

By contrast, Labor is paying $1.18 for party of next Premier, as opposed to $4.50 for the Liberals. While the media are predicting an unmitigated disaster for One Nation, these real time odds tend to foreshadow a very different kind of disaster. The coalition looks like being decimated in the eyes of the average punter as opposed to the narrow Labor victory that the polls and media narrative seem to suggest.

So who do you believe? The heavily poll-reliant mainstream media who have a vested interest in deception and little to lose by being wrong, or an enourmous pool of Western Australian punters who literally can’t afford to be wrong and in most cases whose wagers aren’t clouded by bias? My money’s on the punters.