I draw our reader’s attention to this article: 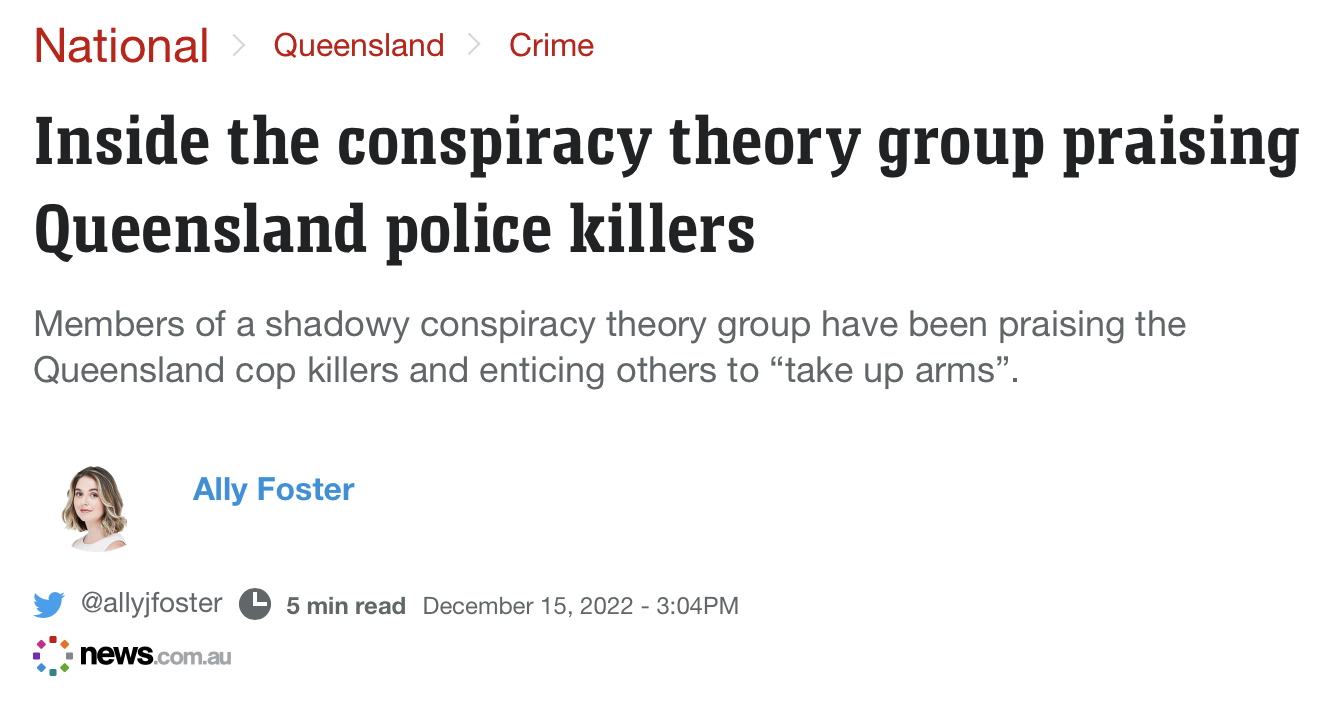 Within hours of the news breaking, attention had turned to Gareth, who had been an active member of a number of conspiracy theory websites.

His bizarre beliefs included that the 1996 Port Arthur massacre was a “false flag operation”, that the government was running “re-education camps” and that Princess Diana’s death was a “blood sacrifice”, as well as an opposition to vaccines and Covid lockdowns and support for the sovereign citizen movement.

Now, it has been revealed that at least one of the brothers allegedly interacted with an anti-vax conspiracy theory group, where members were encouraged to share and discuss their views on a range of controversial topics.

While there is no evidence to suggest any member of the group was involved in the events at Wieambilla, the telegram is run by David Oneeglio, a major Australian conspiracy “influencer” who gained a following after emerging as one of the major anti-vaccine, anti-government and anti-lockdown voices during the pandemic.

Gareth even referenced Oneeglio in an anti-lockdown article he wrote for online conspiracy site, Cairns News.

In it screenshots of a Telegram group are given as proof of how dangerous, we dangerous conspiracy theorists are. The reaction of the group, which it is alleged the police murderers belonged to, has been to call for others in the group to take up arms themselves and go on a police killing spree of their own.

In the circles of the XYZ followers, we denounce this as “Fed posting”. That is saying something that can be seen by all of the security agency spies in the group and provides an excuse for anti-terrorism agencies to arrest you and throw you into jail for a very long time. Personally I ban such people from my group (usually after a warning), mainly because I suspect people who do this to be the police themselves, trolling the page trying to induce people who wish to vent their frustration into incriminating themselves.

But, just for sake of argument, let us assume that the people in this group really are terrorists in waiting. That the result of this incident has simply been to inspire many more people to act pre-emptively and declare war on police and or government officials, politicians, etc. Does it then matter, whether or not the police officers were murdered by citizens or whether the whole thing is a false flag?

(Verily verily) I say to you, it doesn’t make a blind bit of difference.

As I have said repeatedly, I don’t endorse it, I discourage people from doing it, but I predict it’s going to happen anyway.

I am past the stage of having any sympathy for police being killed, or politicians, or top bureaucrats, or Agenda mastermind billionaires. I’m sure it’s going to happen and each time it does, I will simply shrug my shoulders and tell you that I too identify as a conspiracy theorist and my pronouns are “I”, “told”, “you” and “so”.

Alexander Solzhenitsyn writes in his book The Gulag Archipelago about how the political prisoners in the Soviet Union all lamented that when the secret police came to arrest them, that they didn’t fight to the death then. They reasoned that they were basically dead from the moment they were taken away and it would have been better to put up at least some resistance rather than just meekly come along.

All of them at the time, believed that they were innocent of any crime and that the arrest was some sort of mistake that would get sorted out at the police station. But of course, mass arrests of innocent people was the whole point of the Soviet system. So people lived in fear and disappeared in the middle of the night.

So maybe this alleged incident was a false flag. Maybe it was simply a Gulag Archipelago moment. The three dead, deciding that it was better to go out with a bang, than face the court system which everyone knows is rigged against them. Most people in the freedom movement don’t know who Thomas Sewell is, but nearly all of them have heard about what happened to Monica Schmidt. Monica also advocates peaceful resistance. But some are going to see what has happened to her and decide they would rather die fighting than have the process be their punishment.

Maybe that’s what happened here. Or maybe it was a false flag. I don’t know and I don’t care. When the next stage of the Agenda is put in place, it will result in more incidences like this. More false flags and or more Gulag Archipelago moments. More fake terrorists and more actual terrorists. I can advocate peace until I’m blue in the face, it won’t change anything. Every action has an equal and opposite reaction and the Globalist leaders are intent on acting out their totalitarian wet dreams. For those that have turned to God you know that the Bible shows how God puts what Issac Newton articulated into practice.

Everyone who has been red pilled to even a basic level will have thought about how they will respond if the police one day comes for them.

I would suggest that if it’s a knock on the door, you don’t need to pull out weapons. If they come in force to bust down your door…. that’s a scenario where no one can advise you on. Other than trust in God and before that day comes, try not to get too paranoid. It may never happen.

For anyone in the Police Force or thinking about joining the Police Force, get out and don’t join. You take your orders from psychopaths and the more they push their insanity, the more you will be required to enforce it, the more likely it will be that you will receive the reaction. Don’t blame me. I’m just the one pointing out science and Biblical principles.

In the meantime, general advice for everyone. Obey all the normal laws, including driving within the speed limit. Get on good relations with your neighbours and do good deeds for your neighbours. Go to Church, volunteer your time to help at charity shops or soup kitchens. Don’t worry about trying to red pill your community. If they want to tell you stuff then acknowledge the truth and offer them a little more info, but if they don’t bring a subject up don’t push it on them. Build relationships and build trust. This is the best way to both fight the agenda and protect yourself from having the police bust your door down. Because if they ever do bust your door down and kill you, none of your neighbours will buy whatever bullshit the media says about you.

It was only a few weeks ago that I wrote in a previous article:

“I believe Waco situations will need to become commonplace before people in Western Nations will be able to live in the kind of society we want.”

I wrote that not because I want such things to happen, but because I simply know that things won’t change until they do.

A single event helps the government spin a narrative, which is why false flag attacks exist. But if such events become commonplace, this destabilises the regime.

A time will come when false flag attacks won’t be necessary anymore. Because the West will be full of legitimate ones. God help us all when that time arrives. It’s likely the only way the Globalist regime will be brought down, but it won’t be pleasant for anyone. Which is why I advise against anyone preemptively assuming the responsibility to bring this about themselves.