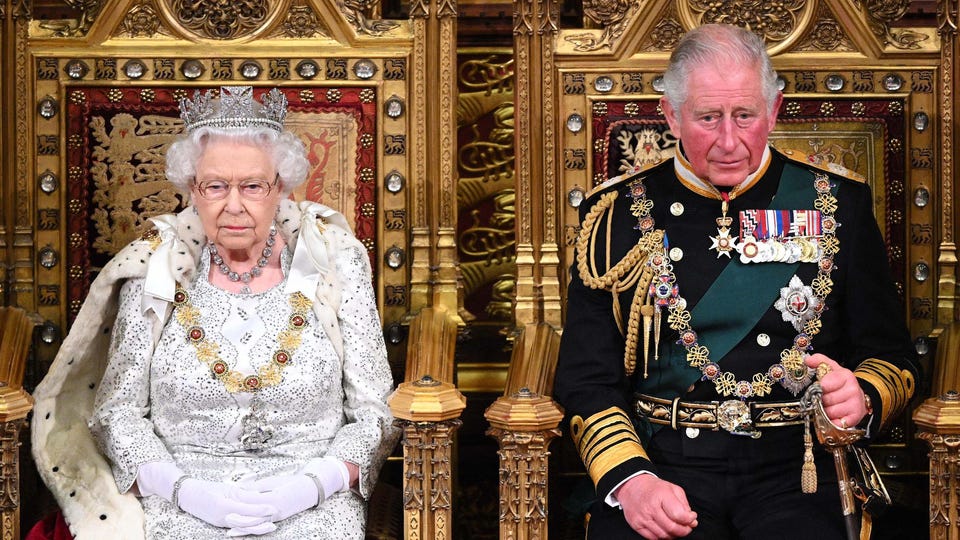 Yesterday we lived in the reign of Queen Elizabeth II, today we live in the reign of King Charles III. The new monarchy ascending to the throne the instant that the late monarch passes so that the Kingdom is never without a monarch. It was a shock to hear the news of Her Majesty’s death, I had assumed for a long time that she would live to 100, I even thought she could live much longer. She always looked young for her age, even in the photos of her swearing in the new British Prime Minister two days before her death she looked in her 80’s not her 90’s. If you are younger than 71 then you have known no other British monarch, as none has existed in your lifetime, she was Queen for 70 years.

We must also get used to saying King Charles when for 73 years we have known him as Prince Charles.

For those who read my blog it is no secret that as a Traditionalist I am also a Monarchist. So I want to address a controversy that exists.

The Queen’s responsibilities for the calamity that has befallen the White Realms.

There is no question that the last 70 years have been a calamity for Australia, Britain, Canada and New Zealand, the White Realms. In 1952 we were supreme, or so it seemed, in our our own lands. We had built these countries, they belonged to us, we had successfully defended them in war and we thought that these lands would remain the property of the British race forever. However in 2022 it is clear that all that was abandoned and instead we live in multiracial countries, something that we never sought, that we never asked for, fought to obtain or voted for, instead it was forced upon us by Liberalism and the supporters of Liberalism.

However there are some on the Right who place all or part of the blame upon the Queen. They argue that this all happened while she was the monarch and that means that she was in total or in part responsible for these calamities. But is that true?

First off the Queen did not tell us her political opinions, we don’t even know if she had them, some people don’t. The evidence is unclear, at times she appeared quite conservative, at others as a stock standard Liberal, certainly many of her speeches in recent decades were filled with multicultural platitudes. But were they her opinions or the opinions of her speechwriters?

You might argue that she shouldn’t have said something if she didn’t believe it, but neither you or I know what went on behind the scenes. Maybe she fought valiantly and sometimes won and sometimes lost, maybe she never complained, maybe over 70 years all these things were true. But what I find interesting is that for so many on the Right there is always someone to blame but themselves.

But you oppose it right, you would change it if you had the power wouldn’t you?

The mistake is to think the the Queen had power, because she did not. The sad and even pathetic truth is that modern monarchs in the West do not have power. In theory she could declare war, but she never did because in reality that power was no longer hers. In theory she could deny assent to any Act of Parliament, the last time that happened was in 1819, that power is long gone. Everything the government does is done in her name, whether she personally likes it or not.

How is that different to you or I?

Things are done in our name whether we like them or not. We are told that in a Democracy we control the government, how in control do you feel?

You might argue that she should have abdicated, or refused to play the game, she should have done more. But the exact same argument can and has been made about you. Why do you keep paying taxes to a government that hates you?

Why do you keep working when you could be a full time revolutionary trying to overthrow the government?

Why haven’t you done more?

Why haven’t you been more successful at stopping things?

Why have you and your parents and your Grandparents done so little to stop the rot?

But in truth how much power do you have?

The Queen had influence and she had prestige, but both were won by her continuing to play the game and in the end she had to deal with Liberals. So her arguments would, maybe did, fall upon deaf ears. Ears that listen but do not hear.

the Archbishop standing before her shall administer the Coronation Oath, first asking the Queen,

Madam, is your Majesty willing to take the Oath?

And the Queen answering,

The Archbishop shall minister these questions; and The Queen, having a book in her hands, shall answer each question severally as follows:

Archbishop. Will you solemnly promise and swear to govern the Peoples of the United Kingdom of Great Britain and Northern Ireland, Canada, Australia, New Zealand, the Union of South Africa, Pakistan, and Ceylon, and of your Possessions and the other Territories to any of them belonging or pertaining, according to their respective laws and customs?

Queen. I solemnly promise so to do.

Archbishop. Will you to your power cause Law and Justice, in Mercy, to be executed in all your judgements?

Archbishop. Will you to the utmost of your power maintain the Laws of God and the true profession of the Gospel? Will you to the utmost of your power maintain in the United Kingdom the Protestant Reformed Religion established by law? Will you maintain and preserve inviolably the settlement of the Church of England, and the doctrine, worship, discipline, and government thereof, as by law established in England? And will you preserve unto the Bishops and Clergy of England, and to the Churches there committed to their charge, all such rights and privileges, as by law do or shall appertain to them or any of them?

Queen. All this I promise to do.

Then the Queen arising out of her Chair, supported as before, the Sword of State being carried before her, shall go to the Altar, and make her solemn Oath in the sight of all the people to observe the premisses: laying her right hand upon the Holy Gospel in the great Bible (which was before carried in the procession and is now brought from the Altar by the Arch-bishop, and tendered to her as she kneels upon the steps), and saying these words:

The things which I have here before promised, I will perform and keep. So help me God.

Then the Queen shall kiss the Book and sign the Oath.

The Queen having thus taken her Oath shall return again to her Chair, and the Bible shall be delivered to the Dean of Westminster.

Nothing about protecting her people, instead she swore to ‘govern the people………according to their respective laws and customs’. Which in reality meant that she, like you and I, had to go along with the real power, Parliament and the law.

A Queen should have power and most people automatically thought that she did, but she did not. Influence and prestige yes, but not power. She was instead bound by laws and customs that restricted what she was allowed to say and do, just as we are.

I would like to make one final point, she was a Queen and traditionally Queens lose power. I once had someone who was interested in alternative history complain to me that so many alternative histories were about which rich White guy became President of the United States. He argued that no matter who was elected it wouldn’t have made much of a difference. He then said that if Queen Victoria had instead been King Victor then history would be very different.

I think he was right, a long reigning King would have lost much less power than a Queen did. I am uncertain if that was true of Queen Elizabeth II’s reign, as maybe there was no real power to preserve by the time she became Queen.

The calamities that have befallen us did not only occur during the Queen’s reign, but during our lifetime. It’s time we asked ourselves why have we allowed these things to happen and to start doing more than complain about them. To stop asking why hasn’t someone ELSE done something because we are that someone.

It’s up to us and it always has been.

Originally published at Upon Hope on 9 September, 2022. You can find Mark’s Subscribestar here.