Following on from the Depp vs. Heard psyop the liberal loons in the legacy media are persisting to pull at feelz that frankly fall on deaf ears.

From The Sydney Morning Herald

It would be nice to relax, to take to the bank the undeniable advances made in gender equality over the past decade and watch the interest accrue. Look at the progress!

We have a record number of women in the federal ministry, we finally have legal abortion (in this country, for now), and a focus on domestic violence that has translated into increased taxpayer funding for services.

Women walk through the world knowing, vaguely, about what Donald Trump called “locker-room talk”. But because we’re not present in the locker room, this mysterious talk is a grey area that could lie anywhere on a spectrum. It’s confronting to realise just how far that spectrum extends, to know that this, actually, is what qualifies as japery among some men; this is how they chat when their guard is down, and they can be what Hollywood types might call their “authentic selves”.

Depp sued Heard over a 2018 article she wrote for The Washington Post, titled “I spoke up against sexual violence – and faced our culture’s wrath”. The ensuing lawsuit reinforced her point, but the irony was lost on the vast internet army who followed the case closely.

Firstly the “irony” Jacqueline Maley invokes is hardly lost on those of us whom make up the ranks of said “internet army”. After all we have some conceptual understanding of what woke waman have admitted to publicly in the past, which only leaves the grug male brain to theorize what “grey area” said waman inhabit on “a spectrum”.

The forensics in the Depp vs Heard trial when ostensibly fact checked indicate Heard was guilty of physical abuse and her ever exaggerated claims of being assaulted and abused only makes this memetic headline all the more hilarious: 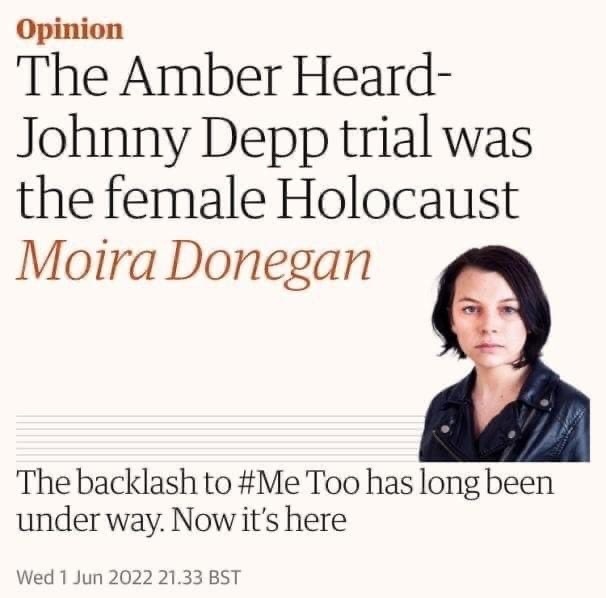