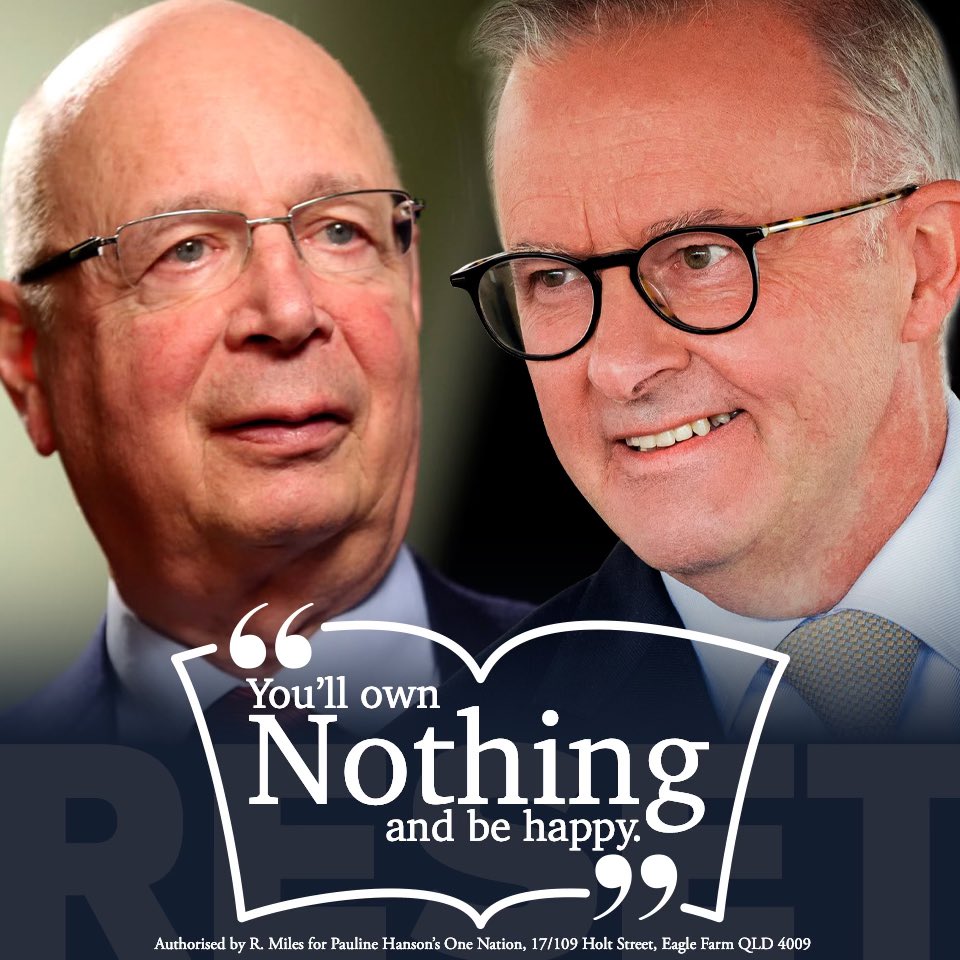 Labor has announced a policy to purportedly tackle housing affordability, we use the term “purportedly” because it does nothing of the sort. Their plan is to literally own 40% of your house.

Not that we’re barracking for anybody here, but Pauline Hanson has quite rightly pointed out that this fulfils a central plank of the WEF agenda – to remove home ownership from ordinary people.

“Anthony Albanese’s plan to take a 40% stake in homeownership is akin to Klaus Schwab suggesting you will own nothing and be happy”, Senator Hanson said.

“It’s another step closer to socialism.”

“If we’re to make housing affordable for Australians, start by closing the door to foreign ownership, and lower immigration numbers – it’s not rocket science.”

“Foreign investors were also responsible for about 2.2% of established property sales, even though in most instances Australian law prevents them from buying these types of properties.”

“If we’re to cool the housing market to enable Australians a chance of owning their own home, it needs to be without competition from overseas buyers.”

“I strongly support Australians having access to their superannuation to obtain homeownership on the proviso that if the property is sold, the money borrowed from super is returned, and the capital gains are used to fund any future purchase.”

“Having government buy an equity stake in a person’s home is a frightening use of taxpayers money at a time when government should be paying down debt, not racking up more.”

“With interest rates on the rise, Labor’s intervention in the housing market is a recipe for disaster — and the biggest losers will be the people themselves.”

The scariest aspect of Labor’s plan is that if house prices continue to escalate, people will need to pay the government even more than their initial investment if they want to gain full ownership of their home.

For example, you might pay $600,000 for your $1 million dollar home in 2022, but if your house doubles in value in a decade and you want to own your house outright, you will have to pay the government a further $800,000, not $400,000. That’s in addition to the interest you will pay the bank. Something tells me the government isn’t going to be paying any interest..

Anybody who accepts their help to get their foot in the door of the housing market is in for a lifetime of bondage to the government.

It’s not a good deal.

To make matters worse, the Liberal National Coalition is also beholden to the WEF. Scott Morrison has committed Australia to becoming a digital prison at the behest of the WEF:

However, his attempt to destroy Australia’s economy via a commitment to so-called “net zero” carbon emissions is receiving some pushback from Nationals MP’s to the utter horror of the chattering classes.

Returning to the issue of housing affordability, the RBA has today raised interest rates to 0.35%. The Reserve Bank governor has done an enormous cope, saying Aussies always knew it was going to happen:

Lowe said Australians understood that interest rates were going to start going up after the pandemic, and pointed out households have saved an extra $240 billion over the course of the pandemic.

“I’m sure it’s happening earlier in many borrowers expected, we all knew interest rates couldn’t stay at this current level forever and many people have saved in advance of that and I think that’s very sensible behaviour,” he said.

Yeah. We all knew that the result of the government printing money as though there was no tomorrow because it implemented a needless lockdown at the behest of the WEF

would be massive inflation. We believe there may be a historical precedent for this sort of thing.