This week’s diversionary political theatre in Australia has centred on the death of Labor Senator Kimberley Kitching. Last week we all just assumed the 52 year old, who died of.a suspected heart attack, had been Pfizered. However, it turns out she could very well have been bullied to death by Fanny Pong. 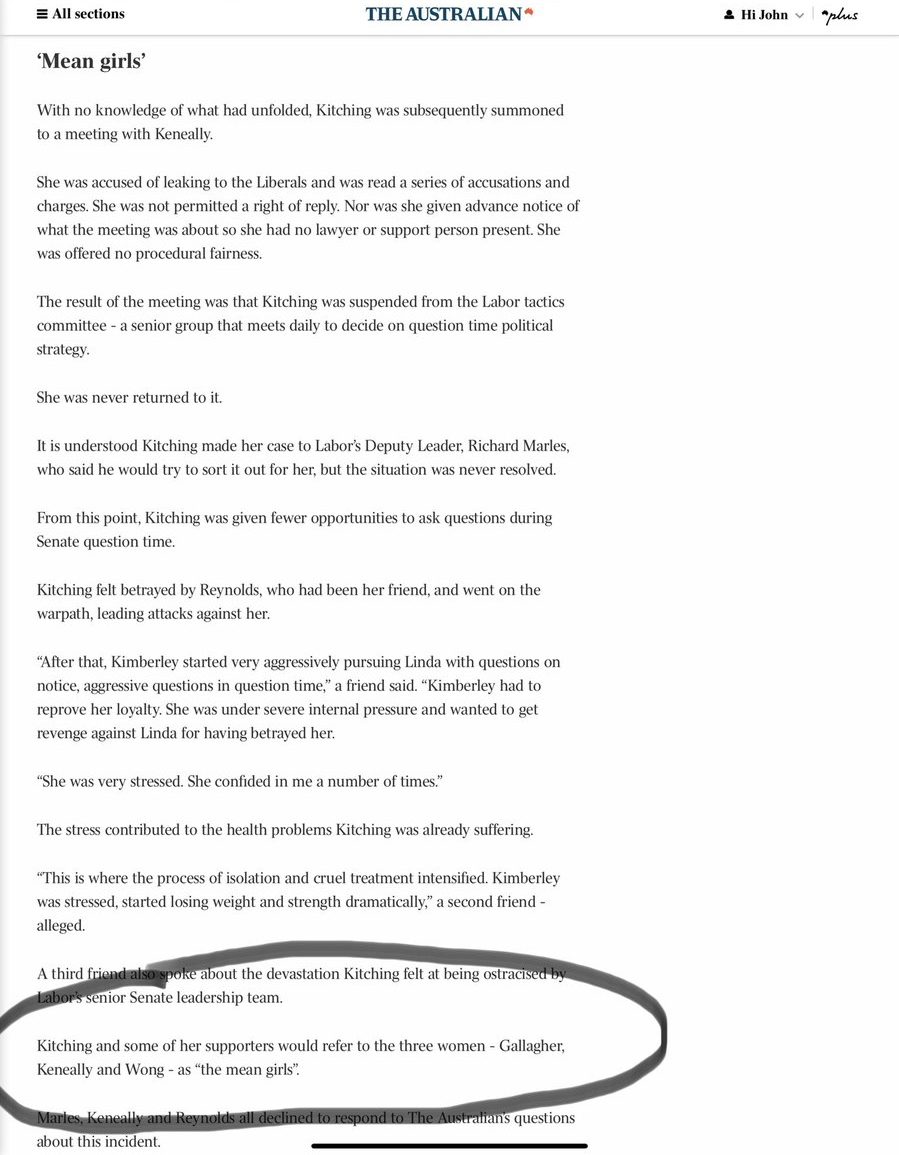 Consequently, #MeanGirls has trended on social media and everybody is sharing this photo. 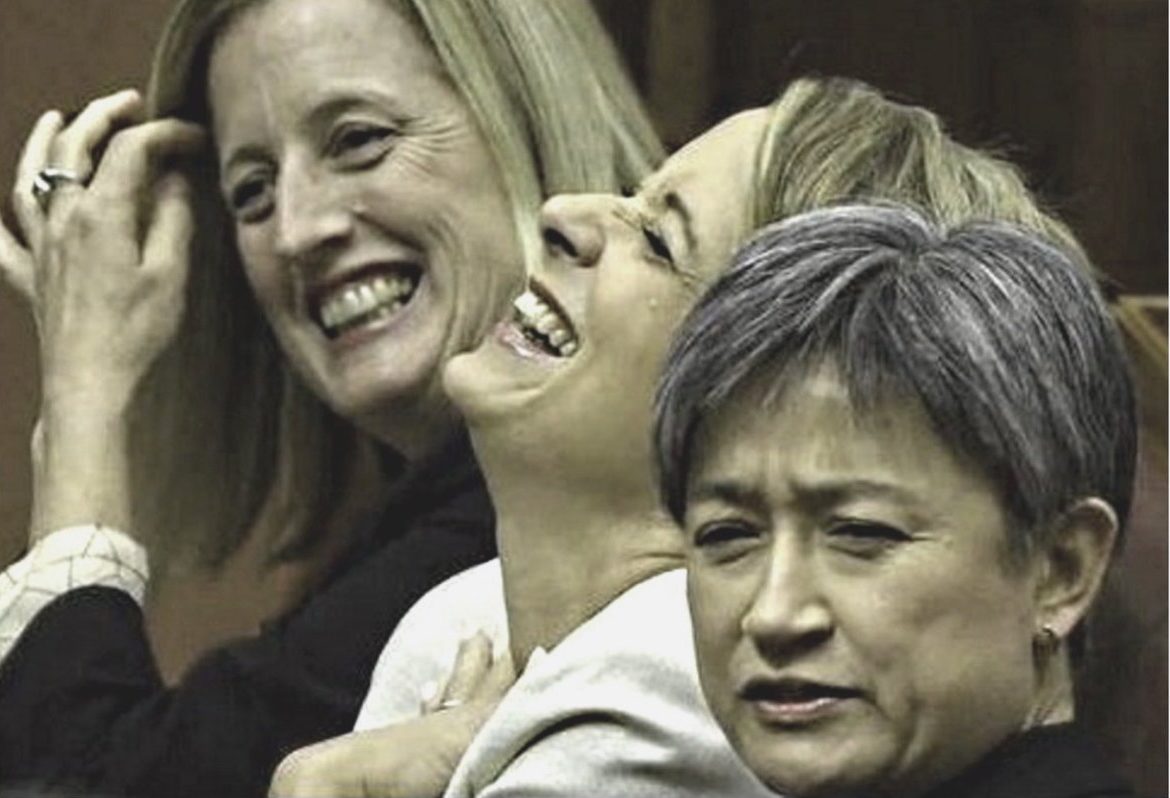 Obviously, these women are all disgusting and bear no resemblance to girls from the Mean Girls movie, which featured a youthful Lindsay Lohan before Hollywood took her soul.

Pong was criticised for her initial plans to miss Kitching’s funeral, which she will now attend instead of a fundraiser. The three Labor Senators in the spotlight are claiming they’re being bullied and have issued a statement which I have not been able to bring myself to read. Instead I can provide XYZ readers with this translation, courtesy of Polibard: 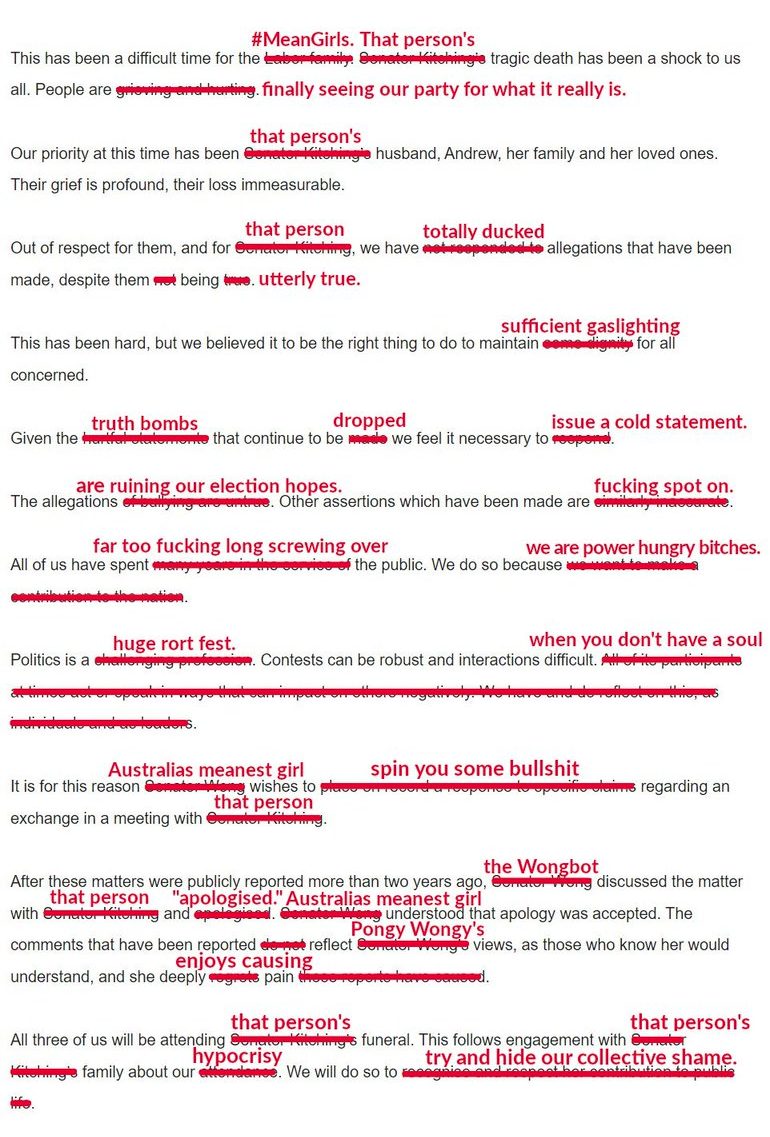 The entire affair reminds me of the collusion-like behaviour of Liberal Party women, highlighted by Adam Piggott several years ago:

“She told a Women’s Weekly Women of the Future event on Wednesday that she and her female colleagues had devised a solution with a “little deal” under Mr Turnbull’s prime ministership.

“It didn’t matter what the other woman said, the rest of us would go; ‘Oh God, that is brilliant. Did you all hear that?’ and so we do it now and reinforce each other’s point of view,” Ms Bishop said.”

I’m calling bullshit. Far from backing each other up, women merely transfer the schoolyard bitchiness to whatever workplace they enter. Women should be almost completely removed from the workforce. When young they can help out as secretaries or at the til, but they should be encouraged to marry and leave their jobs as soon as they are married. They will be far happier this way. As mentioned, all they do at work is bully each other, then all they do when they get home is complain about work.

Everybody reading this knows I’m right.

In conclusion, what people seem to be forgetting in all of this is that Kimberley Kitching was a politician and thus deserved what happened to her. Our entire political class are responsible for war crimes. In the last two years they have imposed a Soviet system of travel and work restrictions, mandatory medical procedures and digital surveillance. Before Covid they were actively and deliberately replacing the Australian people through mass immigration.