UPDATE: On October 14, 2020, the National Justice Party released a statement on the murder of Lee Keltner, who was killed in broad daylight by antifa Pinkerton agent Matthew Dolloff while attending a patriotic demonstration.

The National Justice Party strongly condemns the cold-blooded murder of American patriot, veteran and family man Lee Keltner. Keltner was shot dead by a Pinkerton hired thug with “antifa” associations during a protest in Denver on Saturday, October 10th.  Lee Keltner was a 49-year-old grandfather, veteran of the United States Navy, and an artist who created custom hats. He was with his 24-year-old son Jay, attending a Patriot Rally in Denver, Colorado, when the event was accosted by Black Lives Matter and “antifa” rioters. Photos and videos of the murder show Keltner and other rally attendees being aggressively menaced by a militant agitator wearing a “black guns matter” tee-shirt. A few moments later, Keltner was shot in the head by Pinkerton Agent Matthew Dolloff.

Dolloff’s social media history reveals an obsession with anti-White and far-left social causes such as fighting “fascism” and “racism.” He was hired by NBC News affiliate 9News as a bodyguard for producer Zack Newman, who openly advertises his Jewish political identity on Twitter and evidently shares Dolloff’s leftist views. The Denver news station has come under heavy scrutiny in the past few days for other associations between prominent employees and “antifa” rioters….

The murder of Lee Keltner sets a new and dangerous precedent. A paid mercenary has, essentially, carried out a politically and racially motivated assassination of a working class patriot and nationalist. Dolloff was employed by none other than Pinkerton, the company formerly known as the Pinkerton Detective Agency—the most infamous union-busting organization in American history.

Dolloff was formally charged with second degree murder on October 19, 2020, which carries a mandatory prison sentence of between 16 and 48 years.

On March 10, 2022 it was announced that prosecutors with the Denver District Attorney’s Office are planning to drop all charges against the murderer.

“I can confirm that having fully considered the facts and circumstances surrounding the charges, today we informed Lee Keltner’s family members that we will soon dismiss the criminal case against Matthew Dolloff. In line with our ethical obligations, we cannot overcome the legal justifications of self-defense or defense of others. We are not able to prove guilt beyond a reasonable doubt.” 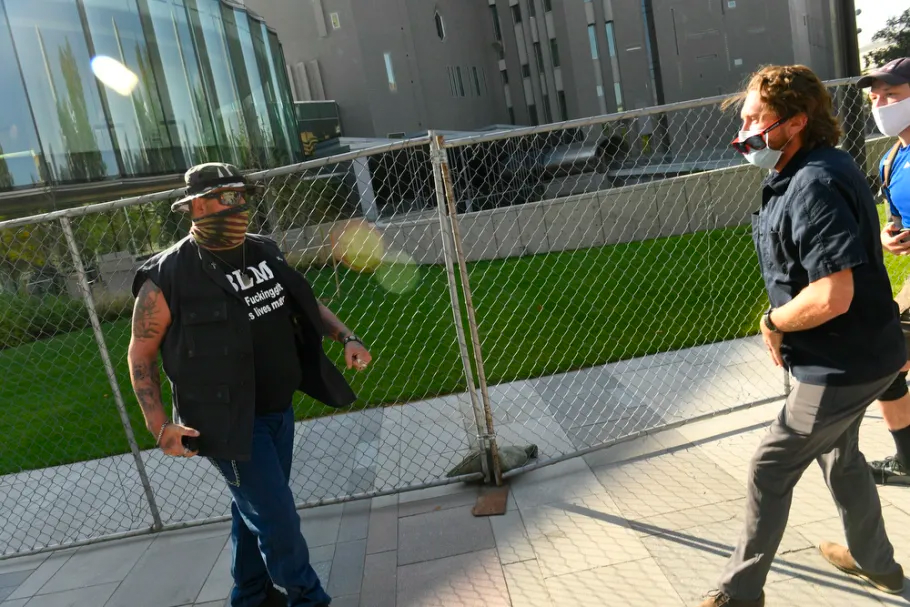 Dolloff’s self-defense claim is bogus, and would be child’s play for any prosecutor to overcome. As can be seen from the above photograph of the incident, Keltner is backing away with his arms down as Dolloff is reaching for the gun at his waist. Photos of the entire incident make it clear that Keltner was retreating from a physical altercation that was instigated by Dolloff. The much stronger self-defense claim of Travis and Gregory McMichael in the shooting of Black burglar Ahmaud Arbery was “defeated” in a politically and racially motivated show trial last month in Georgia, showing that it is not the merit of the case that matters, but the racial and political identities of the parties involved.

This decision by the Denver DA confirms what the National Justice Party warned about seventeen months ago. This murder set a precedent that hired thugs working for the neoliberal political establishment could shoot and kill unarmed White dissidents with impunity. Lee Keltner’s murder grimly foreshadowed the murder of Ashli Babbitt, who was shot down in cold blood in exactly the same way on January 6, 2021. No charges were filed against Capitol Police Lt. Michael Byrd, who was later hailed as a “hero” by the Jewish news media. We have since learned that the other protestors who died on January 6 were likely killed by use of police grenades and chemical agents.

With the dropping of charges against Matthew Dolloff, the establishment is sending a clear message that if you are White and protesting against the neoliberal political agenda, security forces have a license to kill you even if you are unarmed or a veteran of the US Armed Forces.

As the US government and Jewish media whip up hysteria over the war in Ukraine, which was caused and provoked by the actions of NATO, and as the media decries political censorship and authoritarianism in places like Russia and China, the ruling class here are engaging in an increasingly blatant and murderous crackdown on political dissidents. This tyranny started ramping up under the Trump administration after the Unite the Right rally in Charlottesville in 2017, and has grown exponentially worse ever since.

The National Justice Party reaffirms our commitment to the freedom all political prisoners of neoliberal Jewish tyranny, to due process and equal application of the law and to the rights of all victims of political censorship. We pledge to continue the fight against anti-White civil rights abuses by the state, and to hold accountable all those who are responsible for unleashing this campaign of state and media-sponsored terror against innocent Americans.