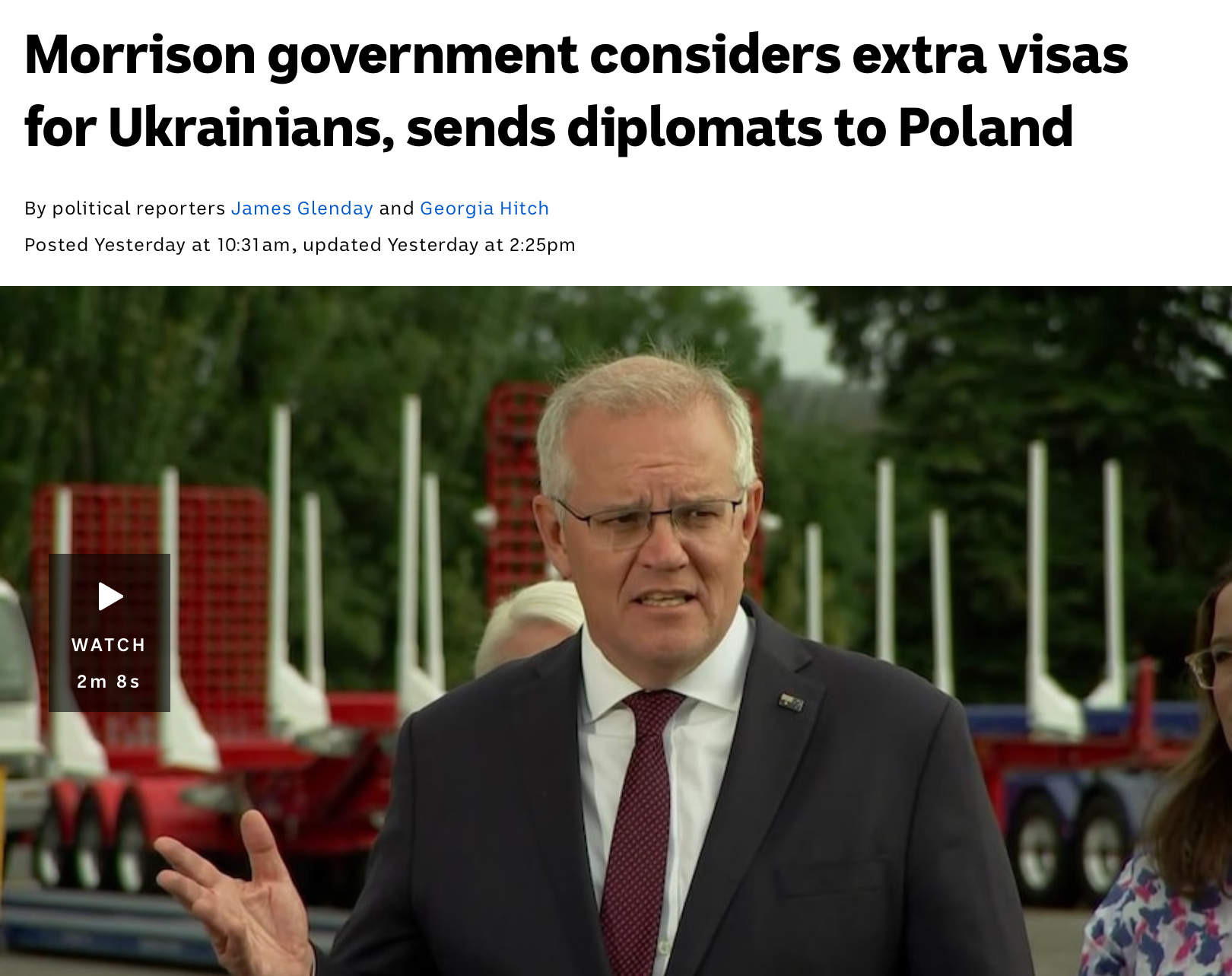 While Labor and the Greens have to play along with the whole Russia hysteria, it will be hard for them to object to the temporary de-browning of Australia’s refugee program:

“Russia is at peak readiness to now complete a full-scale invasion of Ukraine and that is likely to occur within the next 24 hours,” the Prime Minister said after a meeting of cabinet’s national security committee.

“There are even reports already of shelling and things of that nature which could indicate that it has already begun.”

The government will also ban investment and trade with the pro-Russian breakaway provinces by Australian individuals and businesses, following in the steps of Britain and US.

Mr Morrison also pledged to fast-track visa applications from Ukrainian citizens to come to Australia, as well provide support for an expected flow of refugees into Poland.

We are reliably informed that there are thousands of hot, fertile brain surgeons and English translators from Ukraine and Norway just dying to get into Australia, whom our hospitality industry desperately needs in order to stay afloat.

All seriousness aside, we don’t need more immigrants to Australia and we don’t want them. Globalists start wars to gain power through the expansion of debt and to create refugees with which they can undermine the homogeneity of White countries.

Brown immigrants are encouraged to move to the West with the promise that they are entering paradise. Once they arrive it slowly dawns on them that they were only brought in to create the illusion of economic growth via their enslavement to the housing debt Ponzi scheme, so that their host country’s government can import more people who look like them in order to ethnically cleanse the native White populations.

World War 2 really was the start of this racket in Australia and much of Europe, although they had managed to kick things off earlier in America. The end of World War 2 saw some of the largest scale ethnic cleansing in human history.

In Australia it was used as the excuse to expand our immigration intake beyond the British Isles. While still White European, it was the foot in the door for Liberals to gradually open our borders to every nation on the planet and in so doing, to redefine Australia out of existence.

The takeaway from this is that the war in Ukraine provides a brief chance to subvert the globalist narrative on refugees. This is currently what Google defines as a refugee. Understanding the historical context of a likely Ukrainian refugee crisis reminds us that Whites people are humans too. Our respective peoples have unique ethnic and cultural identities, and we don’t simply have the right to assert our identity – it is our duty.