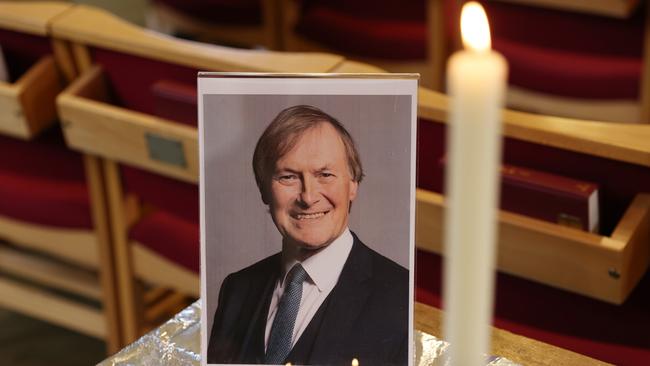 A British MP who championed the diversity was murdered this last week by the diversity. Enough has been said on the irony of that topic. Over at Father Cusick’s site he posted links to a few curious messages on the topic, but from a different point of view. A priest who wished to perform the last rites was refused entry to the crime scene by police. The excuse was contamination of the crime scene. And yet paramedics were allowed on the scene at the time.

As a commenter in one of the quoted messages so aptly put it, the paramedics were given access to attempt to save the man’s body. Yet the priest was denied access in an attempt to save his soul. It’s clear where our societies’ priorities lie.

Our militant secularised society can now not even fathom the idea of saving a soul. Because in our modern world, souls no longer exist. To believe in the soul from a Christian viewpoint is to repudiate all that modern secularism stands for, or at least believes in. They believe in science. The physical science to save the physical body. To infinitely extend the unextendable. But God will not be mocked.

That those police cannot understand the context or idea of the soul I can accept. They are mere products of the revolution, comrades. That the priest in question blindly accepted their spiritual ignorance is much more annoying. It is less the police that erode away the ground beneath us than priests of this sort. He had a moment to teach not just his flocks but countless others. Instead he simply acquiesced to the powers that want us to submit.

But the failure of some believers in Christ to submit is the most dangerous thing in the world for secularism. They cannot stand it. They cannot abide this mockery of all that they pertain to temporarily believe in. But this episode should teach us a few things. One of them is that we cannot know the day nor the hour of our death. So go to confession on a regular basis with a real priest.

But also, we can know from this that the active persecutions will soon come. How could it be any other way? If you look at the situation with honesty of heart then the inevitability of real and active persecution of Christians in the Western world in the very near future is the most obvious thing of all. They have conditioned most people to view the details of Christianity as being of no importance at all. A dying member of parliament was refused the last rites with what I imagine was simple indifference. Nobody takes Christians seriously because most Christians aren’t serious.

Yesterday a reader with the heartwarming name of Magnus Stout posted a link in a comment to the following video of Orthodox Christians who suffered under the Soviet regime. It is a short but brutal raising of awareness for what is to come.

A few passages that struck me:

“We began to gather in our homes and pray. We didn’t go to the elections – that was a sin, and they didn’t let us go to school because they taught atheism instead of the Law of God.”

My high school was atheist – there was no mention of God in the whole time I was there, and that was over thirty years ago. Today they openly teach degeneracy in the schools and prosecute parents as terrorists who object. Just how far off do you think we are to what was to come for these Russians?

Then he began to throw down the icons. He kept on throwing them down and broke the lampadas. The brother’s wives, Tatiana and Euphrosyne, were arrested and later shot, while their little children remained, crying. In the morning they came to take the icons, but we managed to hide a good icon of St Nicholas on the roof so that they didn’t find it. And so we prayed with this single icon. We would take it out, pray and again hide it.

One hundred years ago the church was spiritually undiluted. All Christians were thus a threat. Today, while gay priests flaunt their body tattoos at Catholic alters, the only ones persecuted are those who still practice the now banned ancient rite. Whatever they don’t want you to do is the right path.

The young people in the village were stirred up against us. They came and broke our windows. We were forced to fill up the windows with bricks. It was the same in other villages. If you had to find a believer, then you looked for windows blocked up with bricks – that meant they were believers.

One way or another, they will mark us.

I see so much talk on how to prepare ourselves for the physical battle. But there is far less discussion on how to prepare oneself for the spiritual battle. It is the latter that truly counts. It is that for which you must be the most prepared. Every hour of the day or night. For we deal not with bodies but with souls. Those that can be saved.