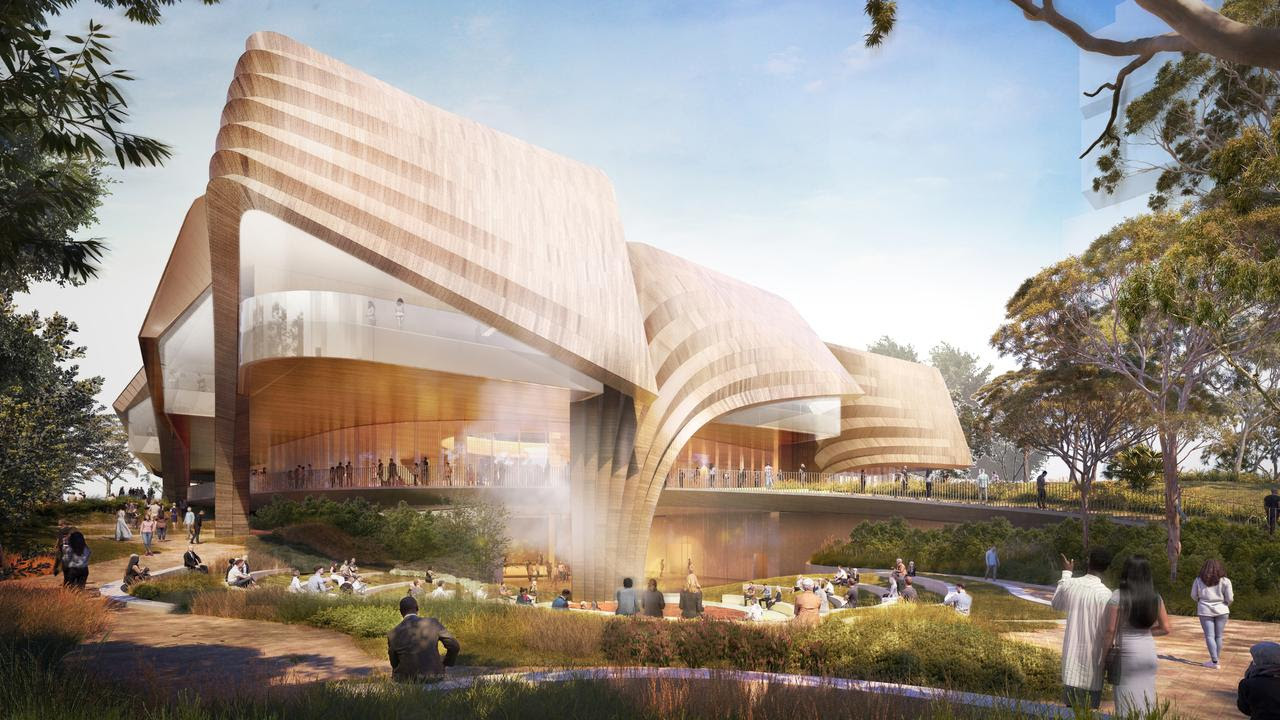 “Final designs for a $200m Indigenous art gallery have been revealed as the future centrepiece of Adelaide’s landmark Lot Fourteen site. Plans for the North Tce gallery have been submitted for approval, ahead of a planned construction start later this year.”

Aboriginal people will be given “gay-styled architecture” acording its designer Charles Renfro, with a budget of $200m paid for by the tax payer. Regardless of the merits of the idea for such a gallery, you would think with all the political correctness these days, they would let an Aboriginal architect design this “Aboriginal art gallery”. But no. Aboriginal culture, although no-doubt being used as a tool for cultural-Marxism in-itself, is just a mechanism to impose gay modern architecture upon Adelaide, a place known as “The city of Churches”.

Architect Charles Renfro, after growing up in the small Texas city of Baytown – where he concealed his attraction to men and spent most of his childhood learning to play the clarinet and avoiding social activities – says he has become a social animal who speaks with pride about being gay. Renfro often says he creates gay architecture that doesn’t try to be straight and carries its differentness proudly.

He is a frequent visitor to Tel Aviv, which is the hometown of his partner of several years, the acclaimed concert pianist Daniel Gortler. The pair live together in New York’s Garment District. They met at a New York gym, at a time when Renfro was beginning to wonder what kind of man would be willing to accept his busy, travel-filled life, and in which work occupied an outsized share of his time and energy. He found a musician who travels even more than he does and is equally devoted to his profession.

The rest of the architecture firm is comprised of Scofidio, 81, whose family is of African-American heritage, founded the firm together with Diller, 62, a Polish Jew who immigrated to the United States with her family. The two met and fell in love when Scofidio was a professor and Diller a student. Renfro, who graduated from Rice University in Texas and received his master’s in architecture from New York’s Columbia University, joined the firm in 1997.

Again, this has nothing to do with Aborigional culture. A homosexual agenda from a Jewish-American architectual firm is about as far removed from Aboriginal sensibilities as humanly possible. The same state Government has just kicked out a group of Aboriginal people who created their own gallery at University Of South Australia. In this case, the gallery was Aboriginal owned and 80% of profits went back into APY lands Aboriginal community. But this is the point, the establishment don’t want aboriginal people standing on their own feet. Even if it were heavily propped-up, this was still independent activity. There is a large “aboriginal industry” of Government services, bureaucracy and NGOs that are counting on continued Aboriginal failure.

The APY Gallery in Adelaide’s west is on the search for a new place to call home after its landlord, the University of South Australia, ended its lease after just two years.

The collective’s manager Skye O’Meara said the group had hoped to stay at the central location for the five years it had originally agreed to in the lease.

“The termination of our lease came as a surprise and an immense disappointment to the elders and artists,” she said.

The Indigenous-owned-and-operated art centre and gallery opened on Light Square in 2019 and connects artists with a wide audience, sending at least 80 percent of profits back to remote communities.

“When we initially met with the university, elders felt that a heartfelt connection had been made and were so enthusiastic about exploring the opportunities that they were presented with by these wonderful new friends,” Ms O’Meara said.

Aboriginal issues are no longer seen as distinct, but are now blended into a larger ball we could just call “queer activism”. Hence why this aboriginal gallery is being closed down and a ginormous piece of ugly “gay styled arcitecture” will take its place with a $200m price-tag. This is also why the ABC does so many stories on aboriginal gays and drag queens. If you are a gay aboriginal, you are higher up the victim ladder, considered quasi-elite and more politically useful. Radical leftist politics does not have an endpoint. It does not want to find a place of stability, it wants constant revolution, both cultural and technological to ironically give us the transhumanist future that capitalist oligarchs have been moving us towards for decades.

The Lutherans did see Aboriginal issues as distinct and that’s why they tackled it in a way that catered specifically for aboriginal people. They realised that these folk would always have one foot in modernity and the other in an ancient tribal way of life, so these missions catered for that. They gave them modern work and living conditions that incorporated their state of being.

Now we have the inverse of that, Aboriginal people having one foot in modernity by enjoying things like higher rates of substance abuse, prison-time, unhealthy food and consequently major health problems. And this just feeds the “Aboriginal industry” because perpetual problems mean endless funding for the revolution. Much of that funding to “close the gap” of disadvantage is diverted broadly into divisive societal change. $200m of it is being targeted at destroying the heritage of Adelaide’s classical European architecture with queer asymmetry.

The public service seems to constantly mimic the treacherous behaviour of Jewish-funded NGOs. There is a revolving door between the two, NGOs deciding public policy and Governments funding these organisations. The public face of these actions is a contortion to enact the strange wishes of the international bankers. There seems to be no public input, wider opinion is dismissed in place of a far-removed elite class who see our society as a play-thing. Politicians fund the very organisations they eventually work for in the future.

The supposed “conservative” State Liberal Government are the ones erecting this Gay-Jewish arcitectural tragedy upon the once beuitiful Adelaide city-scape. The lies move so quickly in a perpetual game of four-card-monte, yet again showing us that democracy is a sham worth exposing.

And Adelaide to its credit has at least one reaction to a State Government indistinct to the ALP or the Greens; the revival of a Christian party called Family First. But the fortunes of Family First really rest on whether they will cross the Rubicon and become truly Christian-nationalist, unapologetic and Biblical, rather than just controlled opposition like half our Church organisations are. There is new competition for the Christian vote and membership from groups against mandatory vaccination. Even if democracy is “fake and gay”, a political party is useful simply in getting the message out there and encouraging people to organise.

Christians should be proud of their history with Aboriginal people, particularly those outback missions that served the natives better than the billions spent by tax-payers since. Will the “City of Churches” rise again or be swamped by a skyline of odd-shapes openly expressing sodomy?