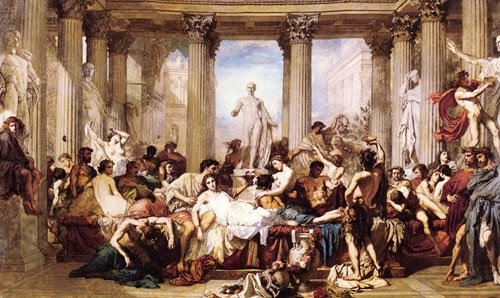 They want to think we can build some great army and go toe-to-toe with all the power and weapons of the modern state, in some glorious revolution, that has the most advanced weaponry and psyop/infiltration tactics known to man.

This is a pipe dream, we can’t fight the Satanic jew system in any conventional way, we have to be like water and fight in a much more fluid way, one that means no matter how hard they hit us they can never break or scatter us.

God gave us the perfect weapon, he gave us the sword of his word and it has the power to bring down empires if only we use it as intended.

In reality, if true Christianity destroyed Rome (it certainly contributed but there were many factors) then it can also destroy (or greatly assist in destroying) ZOG.

Back then the state response was to create a fake universal church that transferred the power of the state to the Roman Catholic priesthood, this preserved the Eastern Empire for a time at least (or at least helped), and kept Rome as the centre of Western Europe, but that is no longer possible.

When everyone can read the Bible for themselves, telling people that they have to work their way into heaven and only the special chosen church can get you there becomes a much harder sell.

Only fools believe this once they hear the true gospel (salvation is by faith alone and once saved always saved) and this is more powerful than any psyop the jews could create.

There will never be an armed uprising against ZOG, we are too disorganised and divided and ZOG is too powerful anyway, we win when there is a spiritual uprising against Satan who controls everything.

We will win when there is no need for an armed uprising because ZOG has become too weak and corrupted to fight against us anyway.

Trust in the Lord, believe his word, it’s the only path to permanent victory.

All we need is faith the size of a mustard seed and we can move mountains.

You can find Matty’s Modern Life on Telegram, YouTube and Bitchute, and Christianity Uncucked at Telegram.